The bike ride of my dreams

Some days are just perfect! This was one of them.

I'd still been feeling a bit creaky but when offered the chance to have company on a bike ride, my route, my pace, it was hard to say no. Especially since it's so nice out.

Michelle joined me just after 9, and we were off a few minutes later, on a warm, nearly cloudless day. We headed down to Fish Creek to cut through, and keep going south down 24th Street. A fairly stiff breeze came up out of nowhere, but it was good for keeping us cool.

We kept going down 24th, past 22x, though it was called something else now, riding at an easy pace. The part of the country has lots of rolling hills, some working semi-ranches (the real ranches are larger than some small countries), some beautiful estate homes that look like they grew out of the ground, and some butt ugly Mcmansions that looked like they escaped the land of the rich and tasteless. Lots of horses.

Hay was being cut. The hill top views ranged from gorgeous to stunning, and that's without a really good view of the mountains. Even the view of downtown was surprisingly good. There wasn't much car or bike traffic, but lots of pickup trucks. Some of them even looked like working trucks, as opposed to the compensation machines seen so often in downtown.

Almost all the pavement was much better than expected, even at my top speed of 72 kph. I think Michelle hit 65 (67!), even though there weren't any really steep hills to let loose on. She bombed down one while I cruised along munching my banana, thinking of the time I got slapped in the face by a banana peel in Black Diamond, and eating a banana at 60 kph after dealing with cows on the road. (In case you haven't noticed, I've started putting in more links to previous posts, just as a service to my newer readers so they get a sense of context. I'm so good to you guys. Not that the cows post needs more readers, it happens to be the single most read post ever on my blog. Can you guess why?)

We even stopped a few times to enjoy the view and discuss how we were feeling and how much further we wanted to go. Remember, Michelle biked and ran a half iron last weekend, and though she said she was feeling fine,  you don't really know these things till you try a work out again. My legs had settled in surprisingly nicely. I was happy.

We kept going south, into the wind, heading towards Okotoks, then both of us realized the effort was beginning to get to us. We had a snack, and headed north. Once we got over the top of a small hill I coasted for a long time, several k at least, pushed along by the wind. I figure it was 20 to 25 kph.

We worked our way back north, coming out near Spruce Meadows, then up 24th again. Even riding with the wind, up some hills, it never got warmer than nicely warm. I can't get over what a beautiful day it was, and don't understand why there weren't a zillion other bikes out there.

This is the sort of day I have in mind when I say I want to get out and enjoy my bike and the scenery. The ride felt really good. I think my back is settling into the bike fit. My feet love the inserts in my shoes. This is the longest ride this year, and one of the nicest ever! Gotta love it. I am so pleased that I can get out for such a nice bike ride, basically on the spur of the moment. It wasn't fast, though coming back was, but that wasn't the point. Enjoying the ride and the company was the point. 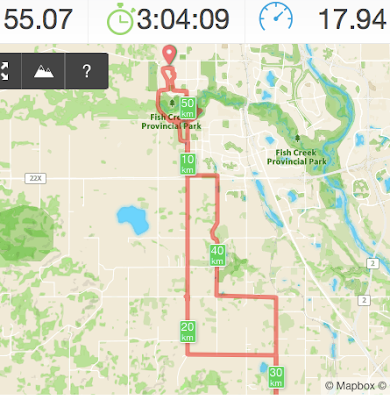