2 days, 2 hailstorms, not over yet

The garden took a bit of a thrashing today. Not like the celestial weed whacking that happened in mid 90's that required new shingles, siding, several windows, evestroughing, and totally decimated the garden. We stopped at Coop on the way home. Here's the clouds just before the hail started. 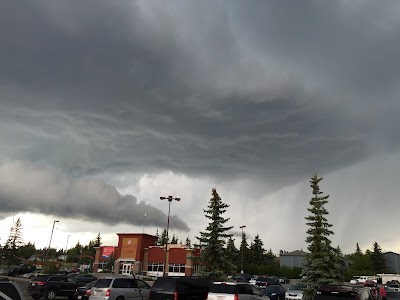 Most of the blossoms are battered, but the leaves and buds are still there, mostly. We will still get more colour. Unless it hails again, worse. Which could happen. They sky is awful dark off to the south.

This could lead into a long rant about climate change and short-sighted political leadership, but I'm all worn out and run down after a long survey about the race a couple weekends ago. The survey took nearly as long as the swim. Turns out the reason the swim took so long is that one of the buoys escaped and was drifting north. They fixed it part way through, so at best, even if nobody cheated the course (which many did) everybody could still have swum quite different distances, while "swimming the course."

It could also lead to a rant about messaging across various social media platforms, but I don't have the energy tonight. I'd hoped to go for a run, but the hail put an end to that. I've run in the rain and the snow, but lightning and hail are right out.

Let's play you out with a happy cat photo. Curtis knows perfectly well that the front door is opened by some human magic involving opposable thumbs. Here he is exploring, trying to figure it out, and incidentally get in the way of me trying to tie my shoes. 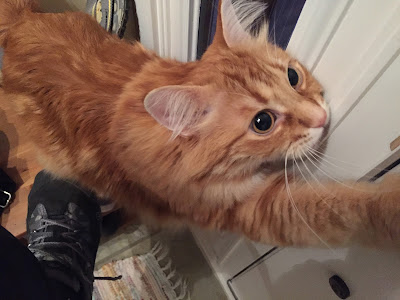