One of my favourite photography targets is Linda's garden. Some of you may recall that two rose buds have been featured several times, slightly out of focus, in focus, and with a slightly different colour balance. I was coming back from chatting with a neighbour and noticed that they are still hanging in there! So here is yet another photo of them, from a slightly different angle. 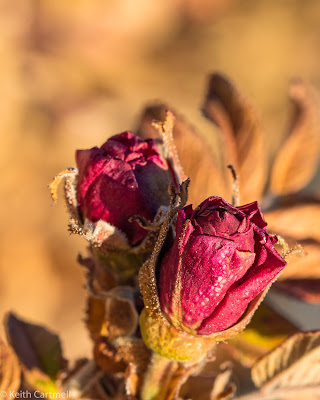 This would have been a lot easier to do if wasn't so darn windy out! I'd get all set up and the wind would blow them around.

The blew me around on the run today as well. Nice and warm for November so I wore shorts and a tech shirt. SHORTS, people, on November 25. 6K nice and easy, 40 minutes. Don't get too jealous, it's supposed to snow tomorrow.