This first photo is not going to be picked up by the Calgary tourism department, but that's ok. They want the image of a nice clean city washed in the pristine air coming off the Rockies.

Some days, not so much. 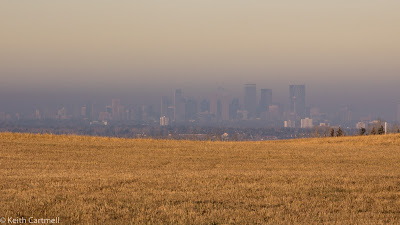 No, I haven't done anything fancy in Lightroom. That's really what it looked like from the south end of the city. I've got several others from various perspectives, and they all look much the same. It's called an inversion, where a temperature difference traps atmospheric pollutants. It looks terrible from here, but the people downtown probably didn't notice unless they looked carefully.

In the department of lemons and lemonade, I thought maybe the murk would be a good thing for a skyline sunrise shot. There were some adventures along the way, and either I didn't drink enough coffee beforehand, or my eyeballs need calibrating.

I took 189 shots, and 103 of them were so badly out of focus they are useless for anything. They will be trashed. I started with 43 given one star, meaning look at them in more detail and compare to others to see what gets worked on further. Some of these got moved to the delete bucket.

In the end, 7 photos were developed, and I'm not even sure how much I like some of them. The murk as skyline backdrop idea turned out to be a bust, and the light wasn't anything to write home about. 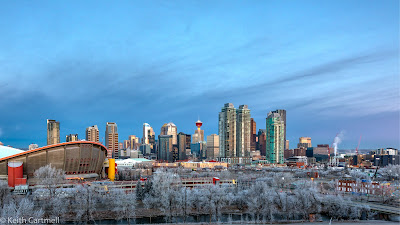 But this is the one I want to talk about. Look at it carefully. 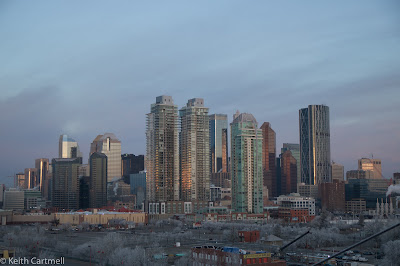 Sure, it seems a little flat and dull compared to the other one. This is straight out of the camera with absolutely nothing done to it but convert it to JPEG. So why didn't I work on it? I could, and in some senses it would end up looking fine, much like the one above.

I'm thinking more about composition now as I actually take the photo, or trying to. Some things you can fix in Lightroom by cropping or other techniques. That isn't going to work here. Why? Because I should have stood about 10 or 15 feet to my right to take this shot. Then the Calgary Tower would have entirely disappeared. Even better, the new Brookfield Place tower would have been nicely framed between the two condo buildings, and I'd see a touch more of the Suncor building and it's reflection. Sigh.

It's the small things that separate great from good. Before, I might have been happy with it, but not now. I know I can do better. Live and learn.

The better applies to other things as well. Workouts. Not every one will be longer, faster, or stronger than the one before, but the overall trend should be better and better. Writing. There's lots of ways to tell a story, but part of the trick is finding the right way, and using the right words. Otherwise you might end up trying to drive a gravel truck down a goat path and that probably isn't going to work out so well.

This retirement thing is almost 3 months now and I think I'm settling into a groove. This is good. The run today was almost in the groove. I could feel myself almost settling in, then I'd get jarred out by something. The whole run was balanced between not quite in and almost in the groove, with just a few groovy bits. 5K 33.

Now that the cooler weather is coming in, I've got an idea for a indoors downtown photo shoot. Just before I started at Penn West I wandered through all the +15s and took some photos. Who wants to join me for a long ramble? We can meet up for breakfast and plot a course.