A bike ride in Fish Creek

No this isn't some virtual trainer ride on some fancy computer software.

Real buddies to ride with.

Real awesome! Thanks for inviting me along.

I figured out my novel blockage this morning. The aha moment came as I was brushing my teeth. This scene I had written was ok for bare bones sketching, but then I stopped. I knew what was supposed to happen next, but the way that first scene played out, the next scene started looking a little more implausible.

The solution is that scene doesn't have to happen there. It can happen later. And later opens up a way to do it slightly differently, betterly. It sounds like it should be easy, but for some reason it wasn't. I want to put obstacles in my guy's path and this scene was one of them. I guess it wasn't the right obstacle. There will be others. I wrote about a thousand words waiting for them to change the oil in the car. A bit more writing tonight and I should crash through 10K words. Yay me!

Except, no, not really. It's the 21st, and I should have about 35K words. So I'm just a little behind schedule here. If I'm going to make the NaNoWriMo goal, I'm really going to need to buckle down the rest of the month. So if I'm a little slow to answer a text...

But when my buddies called and asked if I wanted in on a nice easy ride in the park, I said yes. Actually I said YES! Long time readers know I'm a bit of a weenie on the bike, but it was just a hair under my border of 10C, and it was so sunny out. Plus it's not out on the road exposed to wind and buffeting from cars. I was dressed and waiting for them.

There were a ton of people in the park with lots of walkers and quite a few bike riders. No runners though. I was surprised. Sure, it's nice out, but it's a week day. I guess I'm still getting used to how many people are around various places during the day.

Once in the park we meandered along the gravel paths and through picnic areas. The river is frozen all sorts of different ways, with some areas open and in others the ice is thick enough to walk on. We looked at a little dam someone made out of stones for a few minutes. Some of the stones had these cute little ice caps on. My buddy Neil would have been in the water to get the shot, but I didn't even bring a camera. I just wanted to enjoy the day with my eyes. I didn't even track the ride.

It was nice riding along, not thinking about having to be somewhere. Normally if I'm on a bike in Fish Creek I'm going somewhere, even if it's looking for a spot to take photos. I just followed them and stopped when they stopped. I'm feeling great after the fresh air injection.

More keywording in Lightroom after I got back. We rode past this place today but didn't stop. I suspect it would be frozen over or nearly so. There isn't much of a current. It's a reminder of a beautiful summer day. 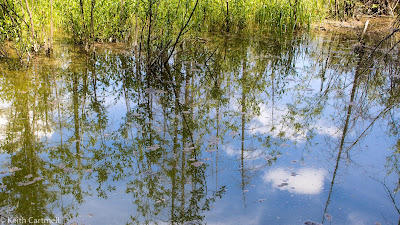