First the closet, then the world

Curtis has learned to open the closet near the front door. I'm not sure why. As far as I know there's just a shoe rack on the floor. It's not even the shoes in daily circulation, so I don't know what would interest him enough to go through the effort of opening it. What I'm worried about is that he figures it's the first step to figuring out the front door. I've seen him pawing at the handle, and sniffing the deadbolt. He watches as we open it. 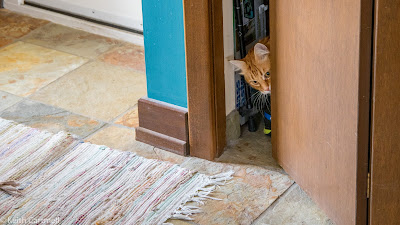 I've been thinking of this photo over the last little while. One of my buddies is struck by the number of celebrities that have passed recently. She was on about Bowie, but I'm pretty sure some will be swooning about Cohen and Vaughn. Some see Trump being elected as a sign of the coming apocalypse.

People sometimes talk about wanting to go back to bed and pull the covers over their head for a while. Curtis looks like he is hiding in the closet and trying to decide if it's safe to come out. The house is safe for him, but he doesn't believe me when I tell him the world is a tough place for kitties.

In the past I've tended to either lose myself for a while in a book or a movie when the going gets tough. Once I picked The Blues Brothers and that turned me onto the blues, a form of music that I hadn't been much exposed to. Once it was Being There, and for the first half of it I was wondering what the heck I was doing there.

Today I was lost in the novel, and managed to pound out about 1500 words. I'm still way behind. This is more difficult than I expected, telling the "bad guys" story from his point of view. He's very much a facts and figures kind of guy, looking at the world rationally. His colleagues respect him but are a little afraid of him. He is polite and soft spoken, though he doesn't say much. His internal thoughts are a joy to listen to, in a potty-mouthed sort of way. He doesn't know that in one important way he is completely blind.

It's also more difficult because it has to dovetail at least somewhat with what I've already written, though I always reserve the right to have a better idea. It's only pixels now, I can go back and revise.

The other difficulty is more subtle. At the moment I don't know exactly what year the story starts in, though it's almost certainly sometime between the early 70's and the early 90's. That gives a lot of ground for fitting in with other parts of the story, which is good. But in another I have to be careful about mentions of computer or communications technology. I know that parts of the story that take place later, his operation makes sophisticated use of those technologies to make money by manipulating the stock market. Presumably he also did in the timeframe that I'm writing about now, but I don't want to have to describe the details just yet. Such are the tribulations of a writer.