I had this clever photo and text analogy all planned out based on the results of a photo scouting trip and the US election. But the more I thought about it, the more it seemed tedious so I decided to go with just the text. I wrote that at the pool after a nice calming swim.

Now you get the photos, and you can construct the analogy yourself, if you feel the desire.

The trips to scout locations for a shoot have been almost more interesting than the actual photo trips. In one sense, they're easier. I don't care what the light is like, I just want to see what the view is. I want to know if there are other buildings/trees/poles/wires to mess up the shot, where is the best place is to park, and how far I have to hump my stuff. Plus, there are some places I want it to be daylight when I go there for the first time.

Once there, with the help of an extraordinarily clever app, I can picture the sun/moon//rise/set, then pick a time of year based on building orientation to the light. After that it's up to the weather of the day. All that planning and you could end up with blah light for whatever reason. Or maybe it's completely obscured with fog or snow. Or maybe spectacular light. You never know till you see the photos on the computer.

The other part that's interesting is to explore all sorts of nooks and crannies I haven't been to in the 36 years I've been living here. Calgary is a city with a little more than 200 named neighbourhoods. Some of these are quite small, like Meadowlark Park with just over 600 people in just under 300 residences. Some are ginormous, like Panorama Hills (I don't have the slightest idea where that is), with more than 22,000 people in 7400 homes. TIL that my neighbourhood, Woodbine, is a little over 9,000 people in 3,400 residences, which turns out to be one of the bigger ones. There are bike paths connecting them, and all sorts of bridges, and the most remarkable views can happen in the places you'd least expect them.

In the course of marathon training I ran through or by a bunch of these I'd never been to before, and documented it on the map I mentioned a few blogs ago. I've been back to some of those places with the good camera and have several others in mind. Sometimes it's landscape, or the skyline, or a cloudscape, or reflections in water. I'm still really new to photography, but the more I think about it, the more excited I get about the possibilities.

Tuesday morning was mainly to think about a shot for the full moon rise at mid-month. I think it will work. Along the way I got these other shots, one of which was more interesting than I had expected.

The shapes of the clouds gave me some hope for spectacular, but it didn't turn out. This pink edging was as good as it got, but the shape over the buildings was kind of cool. 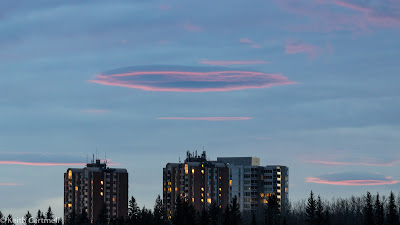 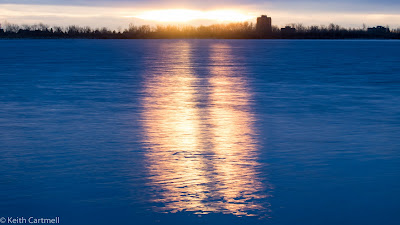 Even just looking, the texture of the clouds was interesting, and it's even more so in the photo. I was tempted to Mordor-ize it, but no. I like the subtle shades of gray, with the sun reflection peeking below. 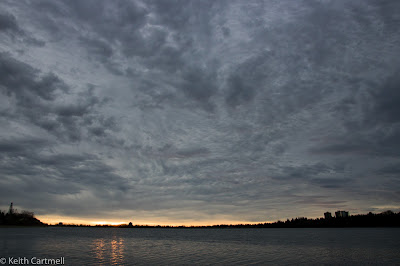 Wednesday's scouting trip unearthed a very nice possibility from the SW. No photos though, I hadn't  brought the camera.