First brick in a while, or, the great dust bunny hunt

Today's workout was pretty good, all things considered. Not as good as I had hoped for, but only about 5 minutes off that. Much better than I feared.

This last week has been for some cross training, and taking a break from triathlon. It dovetailed very nicely with my shaking off a cold, and trying to get my legs recovered. Yes, they're still a bit sore, but improved dramatically over the last several days. I finally figured out I wasn't drinking enough water. Within a day of chugging it down, my legs were feeling quite a bit better. All the rest, rollering, and stretching is finally having an impact. I've been a bit bewildered by this, since I didn't think I'd overdone it THAT much during the race a few weeks ago, but I guess I've stressed something.

I really wasn't sure how it would go today, so I started cautiously, with a long easy warmup, letting the legs spin, concentrating on form. That went ok, so I slowly ramped up the speed, settling in at each new level, dropping back to 85 or 90 to relax. There were a few twinges now and then, but nothing serious, and the spin was pretty smooth. Peaked out with short bits at just over 120 rpm. Did a little bit of standing to stretch out and work on the motion, but not with any real effort. Took two short breaks to stretch during the bike. On the bike for 1.25 hrs, easy to moderate effort. I think I can get back into my normal bike workouts next week. Yay!

Then outside for a run, in shorts and tech shirt. So nice! A perfect temperature to run, maybe 15 C (59 F). Started easy, really concentrating on my stride and what my legs thought of it. Definitely more twinges running than biking, but nothing that had me worried. Settled into a nice stride about 5 minutes in. Not fast, since I didn't want to stress my lungs. Today was about what was right for the legs.

Experimented a bit with different strides, but mainly tried to relax and run easy. Stopped at the 16 minute mark for a brief stretch, mainly as a preventative measure. I was hoping for a 5 K run in about 35 minutes, but about the 30 minute mark I started getting a really odd feeling in the back of my left knee. Similar, but not quite the same as what I had during the Hypo Half. Not "stop running this instant painful" but more than just fatigue, so I stretched it for a minute, and ran again, but after a minute it came back.

During the walk back to the house I thought about my stride, and if something had changed to produce the pain. I ran a bit more, this time rolling up onto the ball of my foot, and trying to relax my ankle during the swing forward. That made a bit of a difference to my stride and I found I was taking bigger steps and maybe landing a bit harder. Something to work on. The "aha!" moment came when I realized I'd been locking up my knees and ankles during the swing forward, trying to keep my feet flat to the ground. Something to think about for the next run.

After some stretching and a quick shower, there was roast duck for lunch, on a bed of rice with carrots and veggies. Wine. Gelato for dessert. Yummy. I apricated.

Saturday was a kind of fun day. It's spring, and the weather is nice, so we had all the house windows open and I got started on spring cleaning. The breezes were blowing some dust bunnies out from their cover, so I got out the vacuum and started the hunt. In addition to the floors, I vacuumed the furniture, lamps, window sills, window and door jambs, all the baseboards and electrical fixtures, stereo components, the computer cable nest under my desk, and here, which hasn't been done for a while. 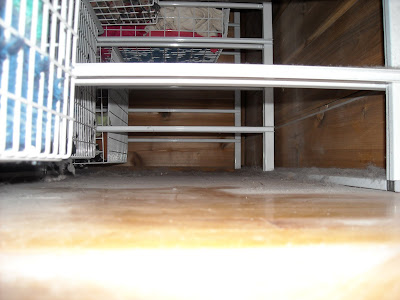 The ultimate lair of the dust bunny. Anybody care to take a guess where that is? This was taken after the biggest dust bunny was taken out. It almost choked off the vacuum cleaner. It took a bit of doing to get the spawn.

Linda had found some e-cloths some place. These ones said they were made for cleaning barbeques. Those of you who feel I demeaned my manhood (such as it is) by vacuuming have never met the treacherous hose that bites and attacks me. Still, in any case, cleaning a BBQ is a manly thing to do, so I guess I redeemed myself, especially since I shoveled and swept out the garage, and tidied. (To say nothing of belching and scratching myself. hahaha) But back to the BBQ. This cloth is amazing. It is almost like one of those late night infomercials. It cleaned things up faster than anything else I've ever tried. Filled up the propane bottle, so I should be good to go for most of the summer BBQ season.

That whole day was good for me, stretching, bending, reaching, twisting. I thought of it all as a core workout, but I didn't count as such.

Back to today. Iced the back of the knee. It's not hurting, but the left calf is feeling tender again.