And now, a pretty good run

The swim this morning was a bit shorter than planned due to a hard back end. No, not my back end. A firm 8am meeting time, with people that are paying me well to respect their time. I don't want to be late even more than I normally don't want to be late. Though I did take a few minutes to chat with my buddy Deb.

Walked 15 minutes at lunch, communing with my legs. Communed with them on the drive home, and puttering about the house after getting home, seriously wondering if I should try to run or not. I had a good bike yesterday, and my hams are feeling tired and pre-crampish. During the swim I had a few ham twinges during the flip turns, as I was really trying to power through them.

Annnnnnnnd, to draw out the suspense, I dressed, did a bit of loosening up, and headed out. Walked a brisk 10 minutes then into an easy run, communing with my legs the entire time. This isn't what I'd call a bouncy easy run. It was more like a heavy footed slog, though not quite like the T Rex of history. I had to vary the stride a bit, as there was some odd twinges along the way, and I wanted to try to break things up a bit. Normally I clump along, same stride. My hams complained a bit if I did that.

I actually ran 35 minutes with no pain! Yahoo!! That was 5K nice and easy. That's the first time that's happened since mid Feb, so I'm pretty pleased. In the great scheme of things it wasn't the best run I've ever had, but so much better than recent ones that I'll happily put it in the bank. After all, it wasn't so long ago that a 35 minute 5 K was a hard run. Did a really good stretch and roller after. Hams, especially the left, are still feeling a bit crampish, but that's ok. Everything is feeling much better.

There is an acupuncture appointment next Monday. Maybe by then everything will be all better, but who knows. It won't hurt to get it done anyways.

Now, back to the stalking in progress....
I found these two images. Not what I'd call pretty. 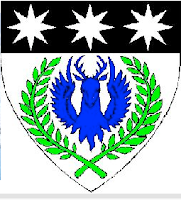