One of the fun things about flying West Jet is their departure terminal in Calgary. For example, look at these two whirli-gigs. 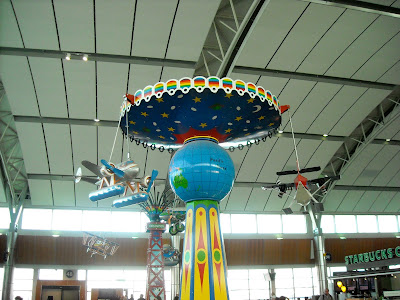 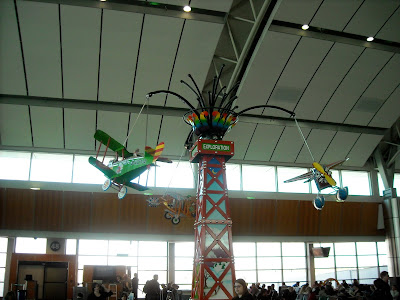 Aren't those seriously cool? At the base there is a giant key that needs to be turned to make it all go around. There is no shortage of children of all ages to turn the key. I have myself, several times. The propellers all turn in the wind of the planes going around. There is no cheesy music. It is peaceful and soothing to watch them go around.

Even better, the guy who made them is a buddy of mine named Jeff de Boer. He is probably the most famous person I actually know, and is an impressively talented artist. He is perhaps best known for his authentic cat and mouse armour, but his chainmail ties, exoforms, the Children's Hospital, and other work is well known too. I met him before he was an artist. Linda gave me a piece of his artwork as a prezzie one year, unique, totally unlike anything he's ever done, and now astonishingly valuable.

Best of all, there's an easter egg. Tell me when you're flying West Jet into or out of Calgary and I'll tell you what to look for.

My father was an airline pilot. Some of my earliest memories are of airplanes and airports, and I've been interested in airplanes and airports all my life. I took air traffic control training at Malton International, before it was renamed to something else, but it's really YYZ. My brother is an airline pilot for Virgin Atlantic. Yet I learned something new on the flight to Ottawa. The West Jet flight attendant says that in the unlikely event of the cabin losing pressure, the overhead compartment will open and ferrets and oxygen masks will drop out. We are to put on the masks and ignore the ferrets. They are trained and will do what they are supposed to do. I never knew that. I have no idea at all what the ferrets will do, and I'm almost willing to go through a loss of cabin pressure incident just to see the ferrets in action. Once again, more evidence, if any more was needed, that I have led a sheltered life and need to get out more.

The pool snuffle that blew up into a cold and made me miserable for a couple of days is now almost gone. This is like a cold on fast forward. I was determined to get onto the bike and do Tuesdays workout, since I knew I wasn't ready for a swim and run.

But first was lunch. And these eyes.

Aren't they beautiful? Lunch at Route 40 Soup Company, or any meal for that matter is a wonderful experience. We pigged out. I knew it would be a few hours before I could get on the bike, but it turned out to be nearly 6 hours later. Stop and eat there; it's worth the trip.

Core and stretched for 30 minutes. The core schedule included pushups, but since they were actively painful I substituted chest presses instead. All else was good. I knew my legs were a bit stiff and worked gently on my hams and calves. Warmed up carefully on the bike. This is were I really noticed the stiffness, but I wasn't worried since it had been a while and I figured if I let them, they'd work out the kinks. All was good for warm up, one leg drill, and cadence drill.

However on the first main set I knew I wasn't ready for a full workout yet. Only 6 minutes at 90 rpm in the same time trial gear as my last rides and my heart rate was a good 10 beats per minute faster than normal, and my lungs were working over time. Since my sinuses just cleared earlier in the afternoon I figured it's probably best not to push. I went into a good cool down, for an hour total on the bike, then another 15 minutes of rollering and stretching my legs. There's some really sensitive spots on my calves. First thing on my to do list for tomorrow is to call the nice massage ladies and see who can take me first.

I'm going to buy nose clips before I swim again and see how that goes. Any advice or feedback on such clips?