There I was, out on my photo ramble and the road stopped. There was a big gate across it. Lots of people have carried on walking, but it was crusty and icy and I didn't have my traction aids. Last thing I want to do is fall down in the middle of nowhere and slowly freeze. I've been further out this road in the summer and it's beautiful.

Still it was an interesting photo exercise. The mountains are a long way off. The gate and the sign is right there, with the trees by the curve somewhere in between. I wanted to get the mountains, trees and road sign in sharp focus, with the gate and no parking sign ok if they were slightly out of focus, but not so much they were blurry. Some of my photography buddies would pull out an app to calculate hyperfocal distance, (Google it if you must, but it's a deep rabbit hole and I'm not going to go there.) but that's much too complicated for me.

I kneeled in the parking lot when I found the right spot for the composition I wanted, then played with camera settings and focus till I found what worked. In an ideal world the gate would line up with the bottom of the sign, but you can't have everything. 11 thoughtful shots later I was done. 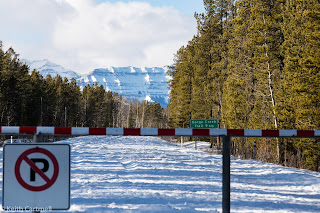 I was thinking about the road stopping, in the wider context. Our society is built around roads. Typically if we want to go somewhere we drive, or are driven. It's rare (my triathlon buddies excepted) that someone walks more than the distance from their car to the doorway of where they are going. I've ridden my bike to work a few times and got some odd looks, with people asking, "don't you live a long way away?" Well, no. It's only 15 K or so riding, depending on exactly the route. Good heavens, I've even run home a few times.

There is increased attention payed to having walkable communities now, but we currently live deep in the heart of suburbia. It's about a 1.5 K walk to a Safeway (that we almost never shop in) mall that includes services like our vet which includes a dog groomer, a nice restaurant, a bank, a liquor store, a Tim Hortons, a smoothie place, a gym, a sports bar, hair stylist, a Filipino restaurant, a dentist, and maybe some others that I can't think of just off hand. The vet is the only regular place we go, and the nice place (Patisserie del Sol) periodically. That's it, aside from the 7-11, liquor store, and Chinese take-out place across the road. All other services are driving distance away, and I'd like to see you carry a week's groceries 1.5 K home.

Now imagine not driving. The most likely thing is a medical incident where they take away our licenses. But what if gas went from about one dollar a litre, to ten, or twenty a litre? What if we come to the realization that we have to do everything in our power to restrict the amount of carbon being dumped in the atmosphere, and that driving cars with an internal combustion engine becomes an anti-social act? Imagine that solar and other sources of electricity continue to get cheaper and battery technology continues to get better. It could get uneconomic to run a lot of the wells that produce various petroleum products.

Lots of science fiction novels start with a 'what if' premise. Faster than light travel, aliens, ray guns, gender swaps, whatever. You grant the writer the one 'what if', and see where it goes. Lets say that for whatever reason, most cars are electric and self-driving with the only petroleum power vehicles on the road are emergency services, utility services, and similar. Even public transit and product delivery vehicles might be electric. What happens?

Lots of space currently used for parking is going to get freed up. If the owner isn't getting any parking revenue to speak of, and nobody wants to put a big office building there (Calgary has a huge glut of office space now) the land owner is going to have to think of something to do with it.

I suspect the roads will be a lot emptier, and we will see cyclists take advantage of it. It would be much safer now, given there would be a lot more cyclists, and the fewer drivers would be more highly trained. A lot more local services would spring up to service neighbourhoods like mine. Probably even more would be done on-line, with more efficient delivery service.

That covers in town. What about my photo ramble last weekend? I put about 400 Km on the car over the two days. Even at my best, there is no way I could have ridden that, especially carrying the photo gear.

Maybe there is an electric car rental service. In fact, I'll bet there will be competing services springing up soon. When you think about it, an electric car is a much simpler thing than an internal combustion powered vehicle. I can see in a decade that electric vehicles will be common, and IC engines more rare. Which will make it harder for gas stations to stay in business, making the IC cars more expensive to run. I suspect that is a quicker loop than most people think, and that in 20 years or so the idea of running a gasoline or diesel powered personally owned vehicle will seem quaint.

All this is quite beside the self-driving car issue. I think that's coming too, though the timing is uncertain. I'm waiting for our government to decide that having about 2000 people a year die from motor vehicle collisions, with a further approximately 10,000 serious injuries per year, and a further 150,000 mine injuries a year (source) is unacceptable. There are serious savings to the medical and emergency services budgets if those numbers are not going through the system.

The government doesn't seem willing to do what it takes to get the unsafe drivers off the road. That would involve testing, (I've said for years that simulators are the way to go) and telling people they were no longer fit to drive, or requiring those surviving a collision to undergo advanced driver training. Having the car start mechanism tied into a valid driver's license is a neat idea, but would require the car companies to get on board. Doing something drastic about the remaining hard nut drinking drivers would require political courage. I figure they are far more likely to start phasing in self-driving cars in the cities and main highways between them.

I talked to one guy that was all bent out of shape about self-driving cars, and the improbable edge cases that one might run into, and how the programming couldn't account for the real world. Except that  the programming accounts for most of the real world surprisingly well, and getting better practically by the day, and the car defaults to stopping and waiting if it thinks it isn't safe. I suspect the self-driving car is far less likely to get into those edge situations in the first place. There might be a few people killed in self driving cars that would not have happened with a human driver, but look at those stats above. Human drivers have nothing to be proud about. When you get down to brass tacks, the incensed people on this issue are incensed because they might be inconvenienced by taking a little longer to get somewhere than they think it would take for them to drive.

Going for a Sunday drive used to be a thing, and I've done it lots. In one sense I look forward to the self driving cars, mainly on the safety front. But on the other hand I loved doing that photo ramble. Driving along on a country road quite slowly, and stopping often to look at the view is nice. I wonder if you could persuade a self-driving car to do that, or if it will be all about delivering you to a specific street address as quickly and safely as possible.

This is an easily found view that I've shot a number of times. I was hoping some of the horses would come play closer in the pasture where I could put them in the foreground, but no. I think it's better other times of the year when the trees are a bit more interesting, or other times of day when the light is more interesting. I could ride my bike here (uphill all the way!) with a camera in a pack. 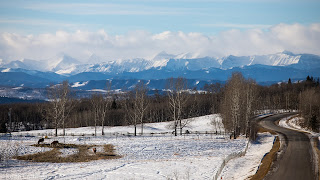