Sometimes just the sky is interesting

In our world of endless distractions, it's easy to overlook beauty. We get focussed on the next place we have to be, or some imaginary deadline, or that super-sciencey device most of us have in our hands much of time.

The quick message is that the people around you are real, whether you know them or not. Pay attention to them, they notice if you don't. Lots of attention to family and close friends when you're with them, the same with the people who pay you to do something, maybe less to acquaintances and neighbours you don't know well, but still some to strangers like the guy in the next car, or the clerk on the till where you buy groceries.

The other message is that there is beauty all around us, if you take a moment to look. I was up early enough to see an odd sunrise. Not particularly photogenic, which is a different thing, but odd. The sky was quite bright in a pale blue sort of way, and there some interesting dark clouds here and there forming a nice silhouette pattern. I was waiting to see if they would light up underneath, but they never did. Oh well.

Then a bit later as I was getting ready to head out for a "run" (more about that later), I was standing on the front patio testing what I was wearing against the current weather. Then I noticed the clouds and a faint rainbow around the sun.

Camera! I wasn't sure how it would turn out, but with a bit of photo processing I got this. You can just see the faint arc of the sunbow above the sun. I guess this is one of the times our eyes see better than the camera. Then again, the camera was able to catch the colour in the clouds that I could barely see. I was liking the layers and stripes. 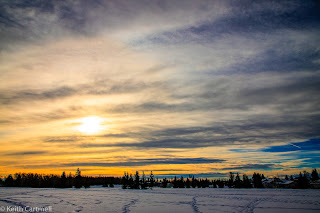 This was my first run since early December. My legs were cranky and I wasn't feeling the run love, and the sidewalks were icy, and blah blah blah. Whatever. A couple days ago I was feeling the urge to run again, only it was -18 C. I've run in that, and will again, but that's not the day to start. I tell people to start (or restart) running gently, and that temperature is hardly gentle.

There's still lots of icy sideways, but today was the day. Lots of warm up and an easy pace made for a nice, if short run. I'll take it for a start.