The downfall of being a pantser, revisited

Lately I've been working on the never ending book projects. As one reader said, it's readable but it's mostly rainbows and unicorn poop. Someone wants to make money out of all this, or prevent it from happening for their own reasons. They are the good guy in their head, so what's their story? That has led to a chunk of writing to build conflict into The Sweet Elixir and the other works.

Plus more information about setting and character descriptions, and the actions taking place. Some writers are great at action and you only notice later they never talk to each other. I'm way better at dialogue. Maybe I've watched too many movies or read too many books where the characters talk to each other in elegantly appointed libraries. And yes, one of my characters has a lovely library.

Before I get started you might wish to review the earlier blogs on this topic, here and here. I did a bit of work closing brackets, and that led to a nice book ending scene, providing you don't mind a gap of about 5 or 6 years from the previous chapter.

So I started on the conflict part and have bogged down several times. This guy is a planner and organizer. The thinker behind the scenes. He spends lots of time at a computer working on databases and spreadsheets, thinking. He attends meetings, reviews reports, and pushes his subordinates (not minions) around. There is a word for all that in most readers minds, and that is BORING! I got him out to the field hoping to find a bit more action, and there's some nice scenes.

But this is a slippery guy. He likes to fade into the background, and as a consequence, there are other interesting characters coming forward. A digression here, we are currently watching a fun show called The Librarians. One of the recurring characters in season two is Professor Moriarty, of Sherlock Holmes fame. He made a great villain; better than the titular villain. I'd love to see him again in future episodes, but I don't think it happens. He was smart, capable, charming, and he certainly thought of himself as the the good guy under difficult circumstances. I'm thinking a combination of him, and the Ba'al character in Stargate (but with less ego) as the template for my conflict guy. But the problem with a smart bad guy is that they don't do stupid things, and don't stand around talking when the time has come for an action.

On one hand I learned a bit more about some of those other characters, but it started going down an unrelated path that I think is a separate book entirely. Plus I've run into a couple other problems in maintaining internal logic to the story, one of which has me stalled.

One plot device that infuriates me is obvious blindness or wilful stupidity (and vice versa), so I'm not going to do it to my (hypothetical) readers. I suddenly realized one day that if character X is observant enough to know certain stuff, he certainly would have noted that certain stuff about character Y, which kills dead a certain scene I'd used as a building block, and everything downstream of it. I either have to explain why character X didn't notice when it is entirely to his advantage to have done so, or rewrite the scene, which leads to it's own complications I'm noodling through.

The other is internal timelines. I wrote a nice scene showing how one character meets up with other characters and gets them to do something for her, and builds for a later scene. Problem is that as written it is simultaneously too late and too early for related events that I've already written. I've talked about this before and used some software to help sort things out. Now that I've sort of written myself into a corner I've decided to revisit that software and see if I can't plot my way out again.

However that leads to a couple other things. After the great music update I started down the path of updating software on my various devices, which is still in progress. None the less, I fired up Aeon Timeline on the big screen and started reviewing. It's sort of interesting looking at software again after several years.

The timeline is mostly focused on The Sweet Elixir and that's ok. I can add an arc for the book(s) I've tentatively titled Bone To Elixir, and while I'm at it I should do The Bone in the Digester, since there are complicated things happening in the background across all the books. I'm just now thinking about the best way to do that. It turns out there is an updated version of this software available, and I need to decide if the current version is good enough, or if the newer version has features I want/need.

So now I'm looking at going through the various stories living on the laptop and marking the key scenes in Timeline on the big screen. The trouble is that while they are sequential, I don't have a specific starting date, other than it being any time within a range of several years, which isn't terribly helpful. The conflicts I've discovered will be obvious, and I can only hope that there aren't more revealing themselves along the way. Although in the long term maybe that's best. Even my big screen isn't big enough.

Then comes the tricky part. Making the revisions in Timeline to smooth out the inconsistencies, and then writing the actual scene out and fixing it in the text. This has worked for me on a couple of occasions, where I marked a meet cute scene, then managed to write it out. Yay me! (That couple married, house sat for another couple for a while, and were looking for a house and eventually pregnant with twins as the story ended. Just in case you were wondering.) A couple other ones I marked out on the timeline, and then it went sideways when I tried to write it out. There's some features I'll need to figure out to track the changes to make sure I haven't missed anything. It might be best to start a new version of the various books. Hmmm.

Normally I like to start writing, channel the characters involved, be open to the unexpected, and see what words appear on screen. It leads to discovering interesting things about characters and the situations. The problem is those scenes don't always go together very well. Or at all, hence my current difficulties. You can't let the characters have their own way entirely; that leads to vast piles of unicorn poop, but you can't force them into something that is not them. They'll sulk, and the perceptive readers will say to themselves, wait a second that's not all what character x would do.

In the meantime, I have to cope with this, and the ever so cute snoring noises they produce. There is no place in the house that is silent once Curtis gets started. If I'm even the slightest bit tired, I want to join them for a nap. 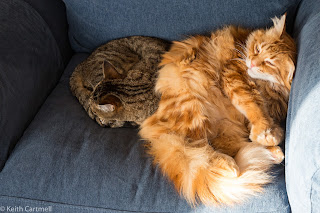