The last of the hidden gems and a summary

I fixed a lot of star ratings and keywords along the way. If you take just photos of your kids and vacations, you can skip this next para, though you might not want to. It used to be that getting a photograph done was a serious business. You had to sit still for several seconds while the film did it's thing. The equipment was portable only in the sense that camping equipment is portable.

Now the technology is so small the biggest part is the interface is for our fingers and eyes to work it. Consumer grade cameras can take dozens of photos a second, and video as well. Memory chips can hold thousands of photos, and people take lots and lots and LOTS of photos. There are almost certainly children only a few hours old that have more photos of them than exist of me. I would be astonished to discover there are more than several hundred photos of me (excepting security camera footage) altogether.

Many photos just end up in a big folder. Apple tries to help with sorting and organizing, and for me it just makes things worse. Theres lots of things Apple is doing that I just don't understand. iTunes, for example. It used to be simple and clean, then it got bloated, and now you need a degree in computer science backed up by a mojo hand to do anything with confidence. I want to make huge changes to my digitized music, mainly because I'm sick of most of it, but I'm afraid to touch it.

How often has someone wanted to show you a particular photo on their phone, and ends up scrolling through many photos, and probably not finding it? I've been on both ends of that.

Lightroom is one of the ways of processing the raw files from a DSLR, and it also manages the information. There are star ratings, colour codes, keywords (which can get very involved) and collections. I've talked about my system before, such as it is, and I'm not as consistent as I'd like to be. (Which reminds me, still no Ask Me Anything questions! Get yours in.)

But if you're using Lightroom or any similar system, one of the things you should do right from the start is to figure out some system for finding photos again. You will want to find them again, trust me. Maybe it's to show a relative that amazing shot of your kid, or what that wiring looked like before you took it apart, or that photo you finally know how to fix with Photoshop, or all those star shots you can now make into a time lapse because you figured out the software. Something. The sooner you figure it out, the easier it is to be consistent. Go back up and look at those numbers again. I'm not a particularly prolific photographer. Anyone who aspires to sell their work will be taking far more photos, and have even more urgent need to track them.

It's easy to get rid of the ones that are badly exposed, or are blurry, or that shot where you covered the lens so you'd know the next three shots were HDR, or the beginning of a panorama, or multiple nearly identical shots where you were experimenting with exposure settings. It's also easy to edit the winners and do whatever it is you do with the winners, like publish them on a blog, print and frame them, give them as gifts, try to sell them, whatever. There are some documentary shots, such as the bridge number so I know where I am, or this is what the garden looks like today. Not art, but of a certain value anyways.

Then there are all the other ones. I am undecided about them. The in between ones. Just a blah photo, maybe the space to the left of a winner photo, interesting but not a winner itself. Maybe I just need to be more ruthless. Then again, I now have lots of hard drive space, (and just cleared up another 38 GB) so it isn't that big of a deal.

There were a couple more hidden gems found along the way, along with some I looked at again, and made the same decision I made when I saw it the first time. Sometimes you need to edit the photo a bit to decide it really isn't a winner.

I remember this one, though. I was going to run it through Photomatix and see what that did, when something came up and I left it. When I came back I probably thought I'd finished editing it or something, or started on the next day's photos. 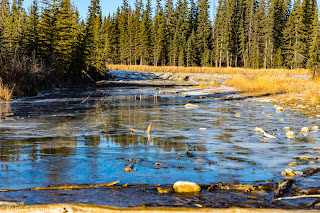 I'd always meant to come back to this one and consider how those stripes got there, and how the rock itself got there. So far I haven't seen another rock like it anywhere in Fish Creek. Maybe it's a rock that has lead a life of unprecedented rock adventure, and is now lurking here, thinking about it's next adventure. 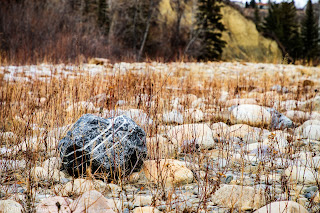