Am I a coffee snob?

You can see me, hard at work on the coffee this morning. 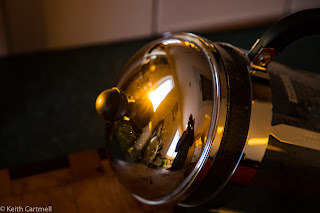 Well, actually, this shot is after making, and after the first sip, but before the second sip as I got an idea. I suppose technically, I'm not hard at work on the coffee at all, but rather am hard at photography.

But lets stick with the coffee part of it. Some people get up, dump some ground coffee into a filter basket made of bleached paper, add water, and push a button on the drip coffee maker. The disgusting gurgles at the end put me off. Sometimes it smells and tastes of plastic, just a bit.

Some people even set it all up the night before, so all they have to do is push the button in the morning. That the grounds go stale overnight never enters their minds. Such people might not even let the full pot brew, but stick their mug under it to get it faster. Speed is more important to them than taste. Some even spring for the fancy coffee makers that work on a timer, so it's ready when they stumble out of bed, if they remembered to set it up the night before.

There are some who use the little landfill cloggers that are reputed to contain a coffee-like substance and who's name begins with K, but they are beyond the pale. We will not discuss them and their uncivilized ways here.

I try not to think about what happens to nice fresh coffee after it's been poured in the pre-heated mug. (Umm, you DO pre-heat your mug, right?) Things get added to it, which dilutes the coffee goodness. As an uncle of mine told me once, if you aren't man enough to drink it black, don't drink it all. So wherever it comes, I drink it black. It baffles me that a particularly popular and expensive "coffee" chain sells drinks that are mostly sugar and various 'flavourizers' added to bad coffee, and continues to get customers.

It takes me about 20 minutes from stumbling out of bed to the first sip, and most of that is waiting for the water to boil. In the meantime I'm dealing with the cat horde and starting breakfast, so it's not wasted time. I'll pick the beans I want and run them through the conical grinder. (Yes the kind of grinder really matters.) Normally we have three kinds on the go. Here's the current selection, delivered to our house a few days ago. I always buy a dark, a medium, and whatever the coffee of the month is. 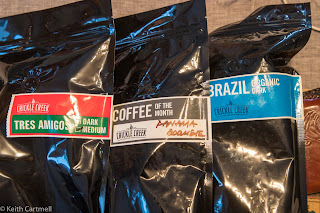 After the water boils I carefully pour it over the fresh grounds, stirring firmly. The coffee smell coming out of the french press is almost as nice as that first sip. Set the timer for 4 minutes, stir again somewhere along the way. Press, pour into cup, remainder into thermos. Sip. Ahhhhhhh!

In retirement I've come to love sipping the coffee in a leisurely way, and coming to grips with whatever new insanity the world has come up with overnight. I try to overlook the worst of it as I think about what my day will be. It could be anything, who knows? Certainly not me at that point, unless I've got something scheduled. Right now I'm inside of course, but during the summer it's particularly nice to be on the patio, smelling flowers with the morning sun.

Eventually I come up with a plan, except when I don't and am a total slackerpants. The day I wrote this was lots of blogging stuff. Updating my photo blog. Getting ahead on blog writing. Doing an experimental macro shoot, with one really nice shot, and a few so-so ones. Some puttering around the house. Delicately molesting the cats as they were trying to snooze in the afternoon sun. Life is good.

Email ThisBlogThis!Share to TwitterShare to FacebookShare to Pinterest
Labels: retirement