Not quite a rainbow bridge

Looks sort of like a bridge, though. You might want to embiggen this one and take a closer look. It's 10,490 px wide, and thus would print out 3 feet wide by about 1 tall in exquisite detail, and probably bigger if desired.

This was Sunday morning, thinking the sunrise might be nice. If you know where I live you'll realize this photo is facing west. That was a much better view, as sometimes happens.

Here's a parable for you. Most people look around and can more or less see their current situation for what it is. Some can't, but that's a different story. Over there, way over there they see a different situation for themselves. One that's better. Some people see a situation where they are the next Wayne Gretzky of whatever field they want to occupy, plus being an astronaut in their spare time, and the worlds best lover by night. We won't talk about those delusions today either.

I'm talking about the people that see here and now, and a reasonable there and later. The space between those places is what defeats them. They don't see the bridge. For some people the bridge is an 8 lane freeway and they still screw up. Booze or cocaine will do that for you. For some people the bridge is like the famous line from Jack T. Colton, :That ain't a bridge. That's goddamned pre-Columbian art!" (Romancing the Stone, for you kids that didn't get it.) Those people might be expecting a rainbow bridge (did you see what I did there? Look it up. My car license number is your clue.) and if they wait for that to show up they'd better get comfortable where they are.

And yet, what choice do you have? Sit where you are and let your dreams rot? Or step out on it and at least try. The first step is the hardest. Just like couch to 5K is the hardest race, stepping out onto that bridge is hard. Look at the bright side. Some people have to build the bridge first. Some have to scramble down into the chasm and look for the way up the other side. All of these people are going to have interesting things happen to them. Things that probably wouldn't happen if they sat and waited. Even people crossing their bridge might have interesting things happen to them. A roc might swoop down and carry them away to a place where diamonds are littered on the ground like cow poop at a ranch. They might fall through the slats and be saved by their soul mate and live happily ever after in their blue castle. (hint) After they cross they might get a job building bridges for other people since they proved they could do it. Who knows? The only way to find out is by doing it.

I was out for a photo ramble south of Calgary on both Sunday and Monday. Sort of west of Mossleigh, north of High River, a little west of Hartell and lots west of Turner Valley, and yet south of Bragg Creek. For a long time that was buffalo grazing land and not much else. Then Europeans came along and nearly extincted the buffalo essentially for fun. Farmers took over much of that area. Then came oil and gas people that were paid more than they knew what to do with, so they bought parcels of land from the farmers and put up big houses with nice views.

And holy doodle are there ever some nice views to be had! 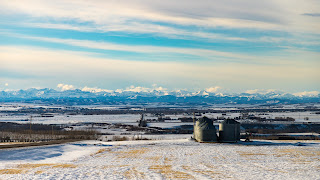 And that's just from the public roads they have to let you drive on, between all the No Trespassing, No Hunting, Trespassers will be Shot and Eaten, No Public Access and such-like signs. The view from some of those private places must be pants-wetting stunning.

I've got a couple skylines from unexpected places, and some more nice views. I'll parcel them out so you don't overdose on them.

The light wasn't as nice as I had hoped, but that's life. I've made a note of several places, and hope to get back to them when the light is nice. Probably a sunrise, for much of it.