It's Saturday as I start write this. Saturday a week ago. It might get added to several times. Who knows? Another year closing down, seems appropriate to include a sunset photo, even though it's dawn as I'm writing this bit. I'll bet you didn't know reading a blog could be so temporally confusing. 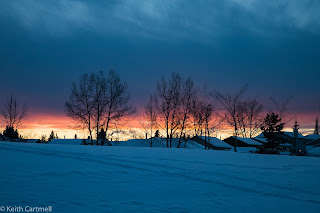 It's been quite a year. I almost don't know where to begin, but if you've followed my blog, you know what's happened. If you haven't been, then you need to do a bit of reading to catch up to my regulars. (And I do thank my regulars and irregulars (and some of you are quite irregular) for showing up and reading.) Only 315 blogs so far this year, thats not so bad. Get the tipple of your choice and get started. I'll still be here.

I've talked a little every now and then about money, and how at first the question is "Can I afford...", and then after a while it becomes "Do I want to afford...". It turns out the same thing is true of time. When you're a child, time is a bit paradoxical. It seems to take Christmas and birthdays FOREVER to arrive. When the last few minutes of class take an eternity for the clock to tick, the whole week seems like a lifetime. Then summer vacation goes by in an instant.

Then it gets bad when you get into work life (or work death depending on the job), and it seems the work week drags along and you live for the weekends with your buddies. Unless you are one of those fortunate people who find a job doing what you love.

Now I have all the time in the world, and I can mostly decide what I want to do. Of course there is a hard end to it, but I don't know when that will be, and hopefully not soon. Could I take the car and drive somewhere on a day long photo ramble? Sure, as long as Linda doesn't need it. Stay home and cuddle cats? They like that. Work on the novel, edit photos, de-clutter the basement? All good, as long as I don't touch Linda's stash of goodies. Which of my buddies is free for some mutually desirable activity? Somehow when you are choosing what to do, it's a lot more fun, even if under other circumstances it might be considered a chore to get done before doing fun stuff.

Let me just say it's surprising how fast the days go by. Although I'm tentatively penciled in to a project starting next year, I'm beginning to wonder if I'm going to have the time to work again. This being retired is hard work.

I'm still finding the pace. Some days are really busy and it seems I barely have time to blow my nose. Other days are a bit slower paced and I wonder if I want to start digging seriously into some of my ongoing projects, or start a new one.

Then there's various fitness activities. Just the last couple weeks I've dialled back a bit with the intent to give myself a bit of a rest, and start up again in the new year. Gradually, of course. Plus it's been minus WTF cold lately, which makes it easy to stay inside. I'm still not decided for sure about races, though I'm being encouraged to sign up. I think I want to see how the training is going, and then sign up. Saving a few dollars by signing up early just generates stress for me, because then I feel I HAVE to train. I want to swim bike run hike snowshoe whatever because it's fun.

What has been fun this year is photography. Right now I've taken about 28,000 photos this year. Don't be impressed too much, my buddy Neil has taken more than 10 times that. I'm not completely consistent in my keywords, but according to them my most popular subject is Yukon, by far. Those include lots of things, but mainly aurora and landscapes. Flowers, Fish Creek, Macro, and Sunrise are the next most popular. I have periodically thought about my keywords, and the process surrounding them. I will no doubt think more on the topic.

Of those 28,000 or so photos, I've edited about 1650 (not counting those assigned 4 or 5 stars), assigned 4 stars to 175, and 5 stars to 18. Keep in mind I'm not entirely consistent in star ratings either. If you do the math, that means I work with about 6.5% of my raw photos. There are probably 3 times as many edited that I look at in the editing process to winnow down to the one of several similar shots that I'll edit. It's  been fun looking back over the years work. I would like to believe I've improved, but I suppose it depends on what the criteria is. I've been deleting lots of them, mainly because they qualify as clutter. Out of focus, out of exposure, one of several quite similar shots, just plain boring evidence I was out of my mind when I clicked the shutter.

Coming up soon on my list of things to do is to update my photo blog. Some of the photos will drop off, more will be added. I'll let you know when. Stay tuned.

I can see where 2017 continued to suck for lots of people, what with the economy and idiot politicians, both here and in the USA. But things are getting better economy wise. Not so sure about the politicians, though. My neighbours elected Kenney. Sigh.

We have some friends that retired a little while ago, and we had been asking them all sorts of retirement questions. They were right. It's all true. You do spend less money. You are more relaxed. Getting started on things on your own time (provided you actually start) is a wonderful thing. There are idiots on the road at any time of day, not just rush hour. The difference is there's more road rage during rush hour, and more unpredictability the rest of the time. I'm not sure which is worse. You see a whole different crowd and a different vibe at your workout centre. I still haven't figured out the good time to go to Costco.

When we started 2017 we were both looking at a busy start to the year. Linda finishing off a 35 year career at the city, burdened with more crazy work than ever. I was going into a short term part time contract, but knowing it would be crazy busy. We figured the first part of the year would go by quickly, and so it did. Suddenly we were both here, learning to deal with a slower pace of life. It's been nice.

Next year? Who knows? More photography, with better photos. Regular exercise, preferably with like-minded buddies. Maybe some paid contract work. Some de-cluttering, that's for sure. Other projects that seem like a good idea at the time. Just making it up as I go along.

Don't forget, I've had several people make their suggestions for Image of the Year, and you could join this select group. On the other hand, I've had no questions at all for the Ask Me Anything. I figure that people want to get Christmas out of the way, then settle into the process of asking a question that will test my ingenuity. I look forward to it!

Email ThisBlogThis!Share to TwitterShare to FacebookShare to Pinterest
Labels: retirement