One of the nice things about retirement is that you can schedule your time as you like. At least, that's the theory.

I'm generally a morning person. Left to myself I'm usually in bed before 10, sometimes before 9, and I'm usually up before 6. Being in bed at 7 is rare, and past 8 is almost unheard of. In the summer that means I'm not going to get much night shooting done.

Places that are boring in real life and even worse in photos can turn into interesting and dare I say, even magical places at night. So that's one nice thing about this time of year, I can go out in full dark and explore the light and shadows of the city. And right now, night starts about 6:30 (there's an app for that). I can get some lovely shots and be home for bedtime.

The Camera Store organizes a beers and cameras event every other Thursday. Last night was it, to get you onto the cycle. People show up with their cameras at a pub, eat and drink and talk camera stuff, then stroll as they please to another pub to drink and talk more.

It's fun going by yourself, and even more fun with buddies. Last night I'd planned to meet up with my buddy Sean, and it turned out one of the women there had been in a Zeller class with me. She had brought a neighbour, and the four of us strolled amiably towards the new Zoo bridge set to open this weekend, then to the other pub.

A technical camera aside for those that care, feel free to skip a couple paragraphs. The sensor in your camera records the light that falls on it. You can control how this turns out through your camera settings. One of these is ISO. Don't worry about what that stands for, it's just a measure of sensitivity that used to relate to what film you bought.  Film, that's, oh heck you can look that up yourself.

For most cameras it starts at 100 and goes up, 200, 400, 800 and so on. The better the camera the higher the numbers go. (It's more complex than a tweet!) If the sensor doesn't see much light, you get a dark photo. You could hold the shutter open longer to let more light in. That's fine for a scene where neither the camera or subject are moving, or where the moving things (like tail lights) are creating an effect you want. Yes, your heartbeat is enough to move the camera.

Or, you can increase the ISO, which makes the sensor more sensitive to light so the shutter doesn't need to stay open as long. This might be the right thing, if you don't have a tripod or your subject is moving.

So why not crank up the ISO and leave it there? Noise. It's like a false positive. The sensor sees a dark sky, but it's all twitchy and jumpy like a person that's had too much coffee and it's seeing stuff that isn't really there. So the dark sky we see is replaced by this grey with coloured speckles in it, and it looks gross. During the day the photo would be over exposed. The usual trick is to keep the ISO as low as possible and adjust other settings.

(Technical aside over. You can start reading again.)

So my buddy Sean and I get together periodically for a beer and a meal, and chat about the state of the world. We've known each other since 2002 or so, and both do similar kinds of work. I hadn't known he was interested in photography until I started. So we decided to join the beers and camera thing this time. My main camera thing was to explore where higher ISO settings bring in unacceptable noise on my new camera, which isn't as simple a thing as you'd think it would be.

The first pub was unexpectedly crowded, so we drank and walked. There are a number of nice scenes in Inglewood, and we had a nice time strolling and chatting, or waiting while one of us was engrossed in a scene.

Part of the challenge of shooting at night is balancing what our eyes see compared to what the camera sees. I don't want to tweak the photo so it looks like daylight. I want to leave in the shadows, and the subtle light reflections.

Once upon a time this place was the fashionable place to go, then it was really seedy for a long time, now it's a really good restaurant. 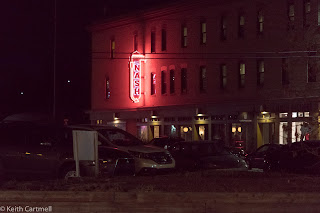 A splash of colour in a shop window. 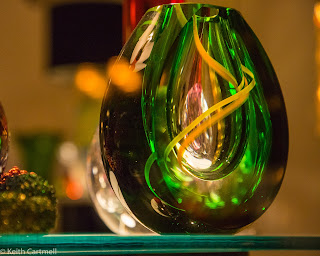 I'm not sure about this one. I wanted more of a halo around the person but it didn't quite come out right. Maybe if I'd held off the shutter a fraction of a second longer. 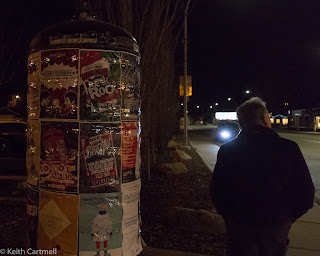 This is actually a dangerous photo. As some of my buddies know, those numbers relate to a specific colour. Now they can hold up a skein to their computer screen, and wonder where the colour calibration is off. 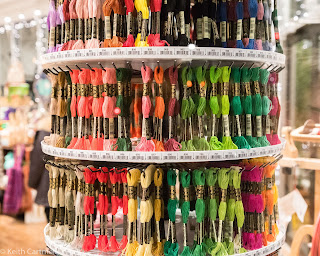 Two of my photo walk buddies, eager to get to the next place. Love the hail battered window ledge as a leading line. 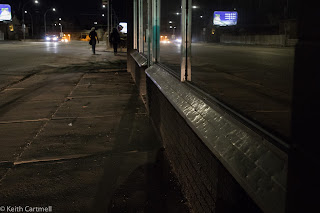 I'm really not sure about this one. This is what I was thinking of when saying a shot might be boring during the day. At night, I'm thinking the shadows and lines make it more interesting. Then again, you might think I'm smoking dope. Don't be afraid to tell me. 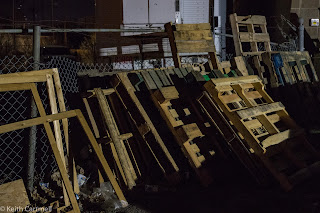 Yes, it would be easy to push the exposure and light up this building, but it would boring. I like the shadows, and the pattern of lights. Beats me why they have two lights together on the left side and not one. 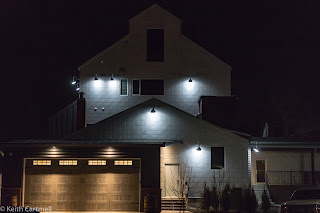