So here we are at Christmas. Once again. Well, technically these first photos are Christmas Eve. This year we took a big risk and put the tree up in the main part of the house, exposed to cat depredations. The idea was we'd use the ornaments that were essentially nonbreakable. Wood, cloth, metal, plastic. At first we were a bit nervous. Curtis was watchful, yet we persisted. 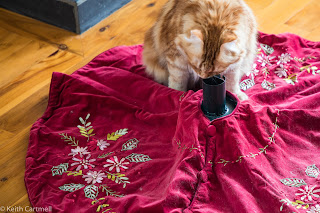 Then we got it up and Celina was right there, exploring, trying to swing from the branches. 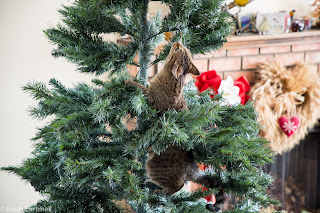 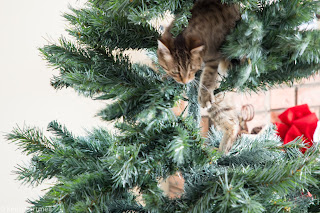 In the end it looks nice. There were some finishing touches added later. Like presents. I think there's a cat under there as well. They love being under it, peering out, wondering if now is the time to leap out and bring down their dinner. 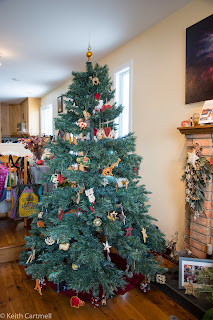 We were off to a perfectly delightful dinner with friends, their children, and grandchildren. We've known the children since they were small children, and it's been interesting to see them grow. One of the grandchildren is no longer small by any standard. It was fun.

There are various Christmas related memes about pets and trees. "Thank heavens you're home, the tree fainted!" is just one of them. I'm sure you've seen more than I have. I was wondering if I should start a betting pool on what the cats had done to the tree in our absence, but just as well. They're over it now. Done. Boring. Unless an ornament slips off and makes an interesting rustling noise on the way down.

My buddy Sean was doing white on white during our photowalk the other day. You can see his results here. From that I was minded to take these two on Christmas. I'm not sure what circumstance of snow falling and quality of light that delivered that wavy line, but I'm not about to go wading through a bunch of snow to find out. 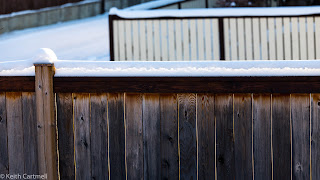 I'd thought I was standing on Fish Creek for this, but one never knows. Maybe there's a bit of a sandbar there. This one is dedicated to Sean. 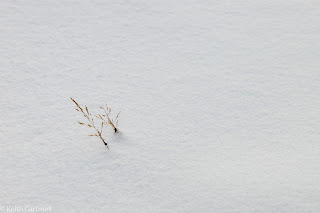 There are more shots from that snowshoe photo ramble, but I'm not done editing yet. Snow is tricky.

It's Boxing Day as I'm writing this. Early, but not by the standards of the bargain hunters. They're probably out there in line already, freezing their tail off. Only once have we got up early to get a bargain, way back in 2002. You can read various slices of the story along with lots of other stuff, here, here, here, and here. Order is not important, though that last link actually tells the Boxing Day sale story, or part of it anyways. Linda didn't believe people actually lined up for stuff.

The Camera Store often gives out gift certs to the first people in line. It's tempting, but I currently have all the camera toys I need. I see one lens where there is almost $1500 off the price. Yes, that's the right number of zeros. I'm not going to ever buy that one.

If you're not a photography person you might not have heard about their adventure over the last couple of weeks. Someone broke in and stole a few items. A few very expensive items, to the tune of nearly $35K, and few enough you could carry it all in your hands without much difficulty.

In a story that a novelist could not make up because the editors and readers insist on plausibility, the thieves put some of the items on Kijiji. Yes, a camera and lenses worth lots of thousands of dollars, on Kijiji. The mind boggles. It validates my theory about conspiracies, that 3 people can keep a secret only if 2 of them are dead. The police nabbed the sellers, and got part of it back, and of course they rolled over on their buddy with the other camera.

The stolen Leica (photographers start drooling almost by reflex) is an extremely expensive camera. North of 5 figures expensive. Stolen I understand. And it got scuffed. Really? Say what? It will make a great story for the buyer of that camera, making it even more rare. Hmmm, I wonder if the price when up because of the scuff, rather than down like you'd expect at the Sears scratch and dent.

Which could lead me to another pension rant. Stay tuned. (Don't you love my segues into rants?)