Sunday night I was out trying to shoot the full moon rising over downtown. Again. It didn't go as well as I had hoped, mainly because I blew the settings. As you can see, the moon is so bright it was just a disc of white light. There is no detail to be recovered through Lightroom mad skillz. I thought I had dialled down the exposure to balance the lights of downtown and the moon, but not enough. It's a tricky balance, and maybe I was trying for too much, I was letting the camera take a bunch of shots in a row, with the idea of maybe assembling a movie. I should have realized with the clouds that wasn't going to work and changed course.

Just as a thing to mess with Facebook, here's the photo I like better, and then the one that is a technical failure. 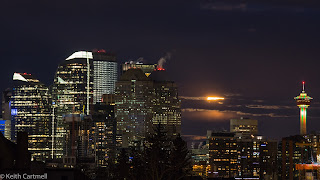 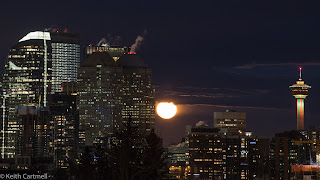 There was a win, though. I did my research and picked the spot to shoot from to get a shot of the moon rising over downtown. I figured from my vantage point it would appear to the side of Banker's Hall, and go over the tower. I wasn't sure if I'd get the moon right above the tower. You can see the clouds that the moon is disappearing into, and it did. The show lasted maybe 5 minutes.

I didn't hang around to see if the clouds would clear up. There was a nasty cold wind and I was freezing. I guess there was another win, though. I was there to see it, and I'll remember the big yellowy moon right between the buildings and the tower. I was out trying to get the shot.


I had the 6D on a tripod with the 70-200 lens aimed at downtown. At the same time I had the 24-70 on the T6 and was shooting some sunset and cloudy colours shots that turned out ok, considering I wasn't in a good spot for seeing the sunset. As well, here's the 6D set up ready to go. 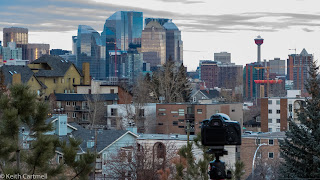 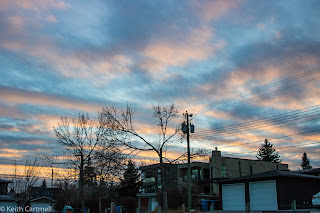 Plus, as a consolation prize for scrolling through photos that are at best documentary, here's Celina! 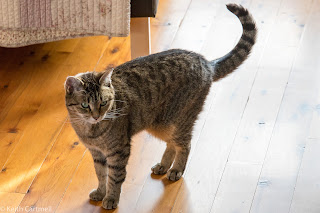