Like I say, fall is Calgary's best season. When I left to go to Yukon for a week in September it was summer. When I got back it was fall. It's been fall, more or less, till today. Today is winter. Snow.

I dropped Linda downtown, did some cameraing, then had a minor appointment. (Hint, I'm not deaf.) The roads were already greasy and I could see where a few people had given themselves or the drivers around them a thrill. It's only got worse since.

Two views from Enmax Park. Downtown in the snow. 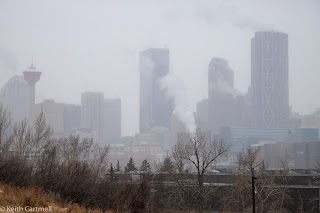 The backside of my buddy Jeff's sculpture. I almost like the metal supporting rods more than the actual front of it. 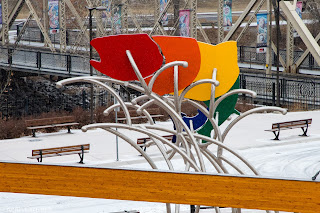 Two views of the new zoo bridge. I snuck these in since the first blog about the zoo bridge didn't get that many readers. 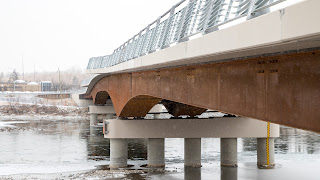 Another snowy view of downtown. The geese were not interested in it, or in me. A few looked at me as I walked past them, but they didn't even waddle away. Safety in numbers or something. I like how the buildings were just fading in and out of visibility. 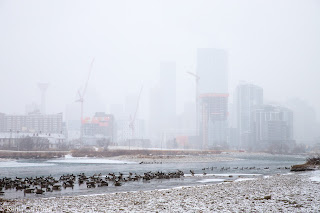 In the inevitable news department, I no longer have a living grandparent. My mom's mom passed away earlier today. I had begun to mentally compose a blog about being 60 and still having a grandparent alive, wondering how many other people could say that. A good blog idea down the drain.

Still, she outlived her life expectancy at birth by more than 30 years, and came THAT close to making 100. My mom is already well past her life expectancy at birth, (though she is only 29, somehow). According to stats Canada I'm going to kick off any time in the next decade or so. Bah! I say BAH! I'm going to be around and inflicting this blog on you for many decades yet to come.