Here we are again. Time to review the November photos and decide which is the image of the month. This is going to be tough, again. I took 2055 photos, gave 272 one star to look at more carefully, actually edited 130 of them, and marked 16 of them with four stars meaning they met my criteria for being my best work of the month. Two of them get five stars, meaning they make me go 'wow!'

Yes, the five star images go to the top of the selection heap, but there's more to it. I've ranted about people who say a photographer got lucky to get a shot. It isn't luck if a photographer is consistently getting good shots. It's planning, it's research, it's getting up at all hours to get to the right place early enough to set up, and being patient. Plus having the skills to set up the camera properly for the shot you want.

There is an element of luck, to be sure. That photo of mine in the August Image of the Month, where I caught a bee flying between some sunflowers. That was a fluke. I didn't even see the bee while shooting. Without the bee it's an ok shot, but it probably wouldn't have made runner up. What's important is that I was out there setting up a shot in the back garden, thinking about the bokeh and the placement of the sunflowers in the sunlight. When you put in the work preparing, you're far more likely to get lucky with the light, or some element happening just right to push the shot into star territory.

So where does that leave me this month? All of the shots are repeatable, in that I know where I was standing, and could go back there again to get a similar shot. The weather is the variable. Even the blur of the headlights crossing the track is just a matter of patience, or having a buddy willing to drive. Even the sunrise shot is repeatable, not that specific shot because the clouds are never the same, but getting great sunrise or sunset photos. How do I know this? I've got 11 sunrise/sunset shots with 3 stars this month alone. So I can't eliminate any of them for being a fluke.

There's my personal preferences, of course, but just like someone might like what is technically a bad movie or a poor novel, I might like a photo for personal reasons quite aside from the technical merits of it. Then again, I might get a photo that is technically good according to all the photo "rules", and lots of people might like it, but it leaves me cold for whatever reason.

One of the so-call photography rules is that you're not supposed to run the horizon down the middle of the photo. You're supposed to put the interesting things at the intersection of the thirds grid. If you're into the Fibonacci sequence, the leading lines should end up at the centre of the spiral. This photo breaks those rules, yet I like the sense of space and height and serenity this composition brings, even though the clouds are nothing special. 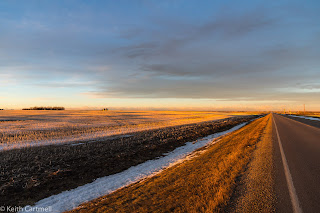 Here's a version of the same photo that is cropped to follow 'the rules' more closely. It's still nice, and maybe technically it's a better photo, but it feels more cramped. What do you think?

Driving along during a night shoot I glanced off to my right, and nearly had a spasm. The blue light on the rail cars instantly caught my attention. Good thing there weren't any other vehicles around. I walked around for a few minutes to figure out the best place to capture that glow and the leading lines, and all the other goodness in the shot. I didn't even have to crop it, or tweak it much. 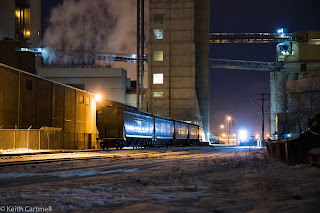 This one didn't get much comment, but for some reason I keep coming back to it. I'd like to tell you it's a swamp in the boonies, but I'd be lying. It's an engineered wetland in downtown Calgary, on Prince's Island. 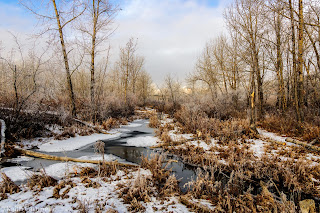 And the winner this month! This is bridge 2 in Fish Creek. I think this is the most photogenic of the bridges, mainly because of the nice arch, and the amazing setting. Here's a slightly different view of the same bridge, times 3. 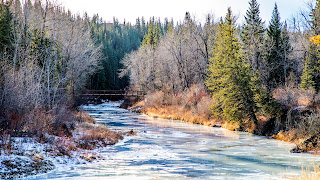