So there are pre Christmas shots of Celina and Curtis checking out the tree. Stay tuned.

This is a followup to last week's macro shots of Julie's lovely hair, and one shot of Linda's. For this week I snipped a few hairs (red and white) of the famous moustache. Both of these are the cut end, not the pointy abraded end worn away from checking out everything I eat. My moustache hairs measure out at 33 mm in diameter, and clearly appear to be hexagonal when I look at them 1:1 in Lightroom, but I'm not sure it will show up so clearly here. 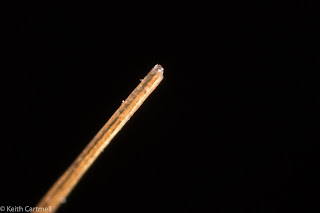 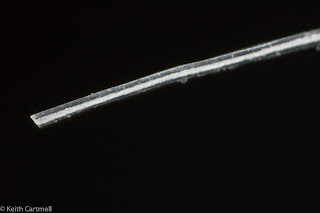 Curtis was right in there helping, being such a helpful cat. (Especially where food is concerned.) He generously donated a claw cast off, a bit of fur, and a whisker. As it turns out, his fur is significantly thinner than anybody's hair, about one quarter the diameter, near as I can tell. Both the shots above and below are at the same magnification, 5x plus the extension tubes. 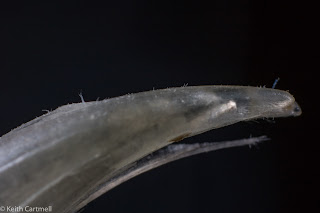 One of his orange hairs. I'm pleased the colour shows up. In Lightroom at 1:1, this is between 3 and 4 mm in diameter. 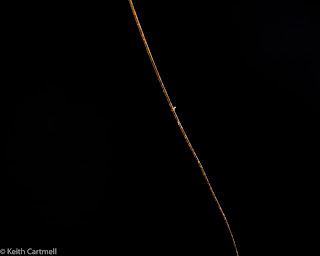 This is the root end of a whisker. You can just start to see the internal structure. 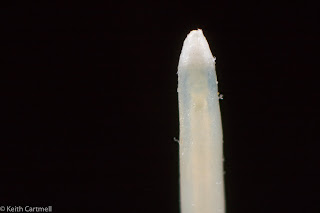 Part way along the shaft, not far from the root. 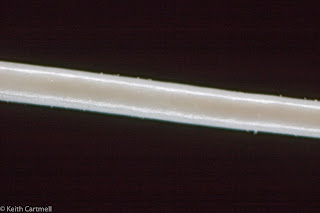 Let me tell you, cat hair is not easy to photograph! It took a while to figure out how to clamp it down so it wouldn't move, and even more to figure out where the funny reflection was coming from. It seems the matt black surface of the bike stand was throwing reflections from the bright strobe lights. It's never done that before, but then, I've never been shooting quite so close it it either.

I was telling BRBE about it, and she wanted in on the action. Again, this is the same magnification, 5x on the lens, with 68 mm of extension tubes. In Lightroom at 1:1, Michelle's hair is about 18 or 19 mm in diameter, a bit thicker than Julie's 15 or 16 mm, and much thicker than Curtis's 3 to 4 mm. I have one other buddy, who we suspect has much thicker hair. It will be interesting to see if I can lure her into the photo studio next time she is over.

We looked up some info. The average human hair is about 20 to 100 microns in diameter, depending on the age of the person, and where exactly along the hair is measured. Older and closer to the root is thicker they say, and my moustache agrees. There are 1000 microns in a mm. No wonder I couldn't measure anyone's hair with the tools at my disposal.

So to get ourselves onto the same units for comparison purposes, let's assume Julie's hair is 20 microns thick in real life, and on the screen is about 15,000 microns. Am I doing the math right to say I'm magnifying it 750 times by the time it gets on screen? I'm thinking I've slipped a decimal place or two somehow.

Anyways, back to Michelle. She loved the colour refracted and reflected from the translucent hair! Her natural colour is a slightly reddish brown, and there are some grey hairs. Just a few, very distinguished. These were shot in between heartbeats, with her resting her head on the bike stand, so the background is more hair. No holding the hair involved. Yes, on the camera screen I could see her head moving slightly with every heart beat. She's such a good sport holding still while I fiddled with focus, especially since she could smell her cup of French Press coffee right there. 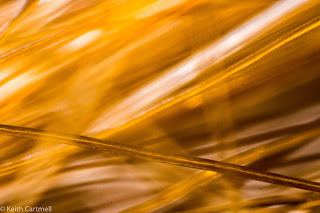 She was happy to see an image of the grey hair, and especially the clean end. 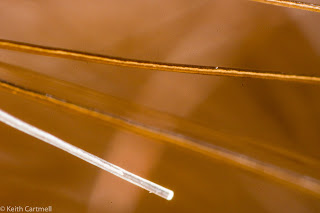 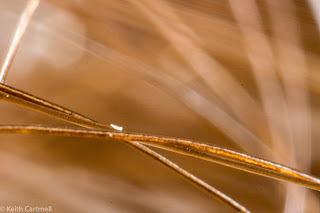 This is her skin. If you look carefully you can see the hair actually growing out from the follicle. Look at the lower part of the photo, sort of centre right and you can see one example clearly. These hairs are almost invisibly fine. 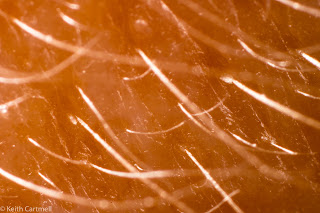 This was wall much more fun than I thought it would be, and the response has been interesting. In many cases people are yucked out by finding hair in unexpected places. How unexpected a place to find hair is a blog? Yet most of the comments are "cool!" One person is geeked out, which I take as a high compliment.