In a recent post I ended up by saying,
"The stolen Leica (photographers start drooling almost by reflex) is an extremely expensive camera. North of 5 figures expensive. Stolen I understand. And it got scuffed. Really? Say what? It will make a great story for the buyer of that camera, making it even more rare. Hmmm, I wonder if the price when up because of the scuff, rather than down like you'd expect at the Sears scratch and dent.

Which could lead me to another pension rant. Stay tuned. (Don't you love my segues into rants?)"

We all know the Sears scratch and dent. The place where battered appliances go to find a temporary home. The price goes down because of the battering, though their actual function hasn't been impaired in the slightest. Just their looks.

But our society seems to rely on looks more than function. People want it pretty, but even more than that, they want it cheap. I have ranted on that in the past.

But we're talking about Sears. Back in 1969, (yes, I know that is a time before history began for many of my readers) Sears was was the biggest retailer in the world. They built and occupied the tallest building in the world for a time. People looked forward to getting their Christmas catalogue. Heck, I even subcontracted for Sears back in the day, helping another guy deliver big heavy appliances. (I should tell you about the time he and I put a freezer into a mobile home, like a snake swallowing a pig.) Let's just say the whole job was an education to a high school or so kid, and that's not counting when I started drinking beer.

Now they're bankrupt. Sears. Less than 50 years from biggest to bankrupt. That's what happens when you don't change with the times. What they're involved in now is called fleecing the pensioners so the big dogs and banks can get some of their money back. They call it rationalize assets, or refinancing, or other fancy-pants accounting terms. It really means someone is going to get a financial haircut, and it's usually the people that can't afford lawyers.

This is obscene. Ordinary people worked for years to earn their pensions under the rules as written at the time. Not just Sears, almost everywhere. The companies often played fast and loose with the pension funds, taking a holiday when times were good, and protesting about topping up when times were bad. Meanwhile, ordinary workers were offered no choice, and had it deducted from their pay every payday.

The Canadian Federal government is trying to rewrite the pension rules for their employees. The idea is to turn it from a defined benefit, to a targeted benefit scheme. Look it up, Bill C-27. If it works this time, next time it might be your pension. You can bet it's going to be dressed up to sound awesome, but the pensioners are going to get the short, sharp end of the stick. It's just another way to get out of the their current legal obligation.

Now, I hear the conservative neanderthals bellowing about unsustainable, and gold plated, and why should they get one when we (and by we they mean "I") don't get one. The answer is that their unions negotiated it. Maybe that means they were better negotiators, or the government was stupid to agree. Maybe you should have supported your union and maybe you'd have a DB pension. Whatever. But it was legally agreed to, and people plan their lives around the various provisions. The government should stick to it.

Going forward is a different deal. Maybe it really isn't sustainable with people living much longer. Fine. Make adjustments on a go forward basis. Build in a transition. Changing the rules retroactively is a societal breaking of faith, on the backs of those who can't change their circumstances now. They typically can't go out and get a job for a variety of reasons. They may be at the point in their lives where their biggest expenses are medical, and the choice is to continue treatment or let that disease eat you. Nobody should have to face that situation.

When the bankruptcy courts look at a defunct enterprise, the big dogs hold out agreements that put them at the front of the line. The first people in line are the ones that drove the company into that situation, the board, C level executives, and their senior management buddies. After all, they can plunder before the courts even see the mess. They all ensure they get a golden parachute. Then the banks, insurance companies, property owners, and the like are in there like the white on rice. Pension plan administrators are well back.

Bah! I say BAH! Ordinary people should be the front of the line. Pensioners, employees. Small business owners caught up in the whirlpool. Consider a pot of money and let's call it a million dollars, just for fun. Think about what happens if it goes to a pool of employees and pensioners. It makes a direct, dramatic, difference in their lives. Most of them will probably be spending it fairly promptly, supporting the economy. I could cautiously support the idea where they determine the present value of that pension, in order to make a clean settlement, or maybe they just buy an annuity.

Now think about what happens if it goes to a bank. A big one. It's just a tiny line item on the books. It means nothing to the bank, which itself is a soul-less entity who's only motive is to make more profit. The people who get paid performance bonuses see a slice of that money; maybe it will make a payment on their yacht or fancy car. Big whoop, as the saying goes.

Lets look at Apple. As of earlier this year they had about 260 Billion in cash. Billion. Canada's entire federal budget for 2017 is 304 Billion dollars. That means Apple could fund the entire Canadian government for about 11 months. What are they doing with that? A bit of investment here, and some buying opportunities there, but they are essentially sitting on it.

What can one buy for $260 Billion? A better way of phrasing it is, what can't you buy? Put to bed this myth that giving corporations tax breaks increases the number of people they hire. It doesn't. It just increases their profits.

There is a saying from my childhood. Put politely, it says "money is like manure, best spread thinly." Making sure employees and pensioners are paid first helps to do that.

After such a heated rant, here is a nice mountain scene from Waterton Park to cool you down. 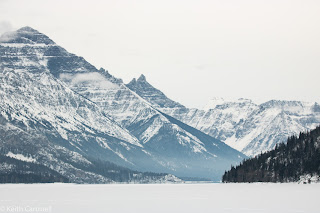