Linda did some lovely arrangements in the flower vases, using cedar boughs, evergreen branches, and all sorts of artistic odds and ends around the house. Then she did some smaller bouquets, here's one example. 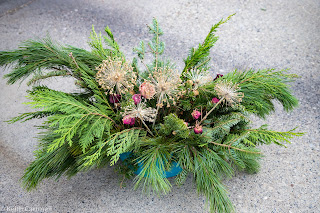 The cats don't care that it's Christmas and the world is going nuts. They just lie there in a heap looking cute. I want to do the same, preferably cuddling them and listening to them purr. It's very soothing. 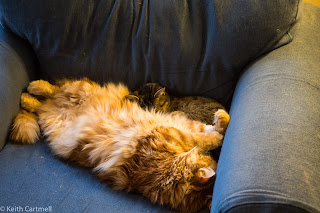 For the swimmers of you, BRBE is working to break some of the bad habits in her stroke. Now, the first thing to recognize is that stroke got her through the IMAZ swim like a champ, much faster than she expected.

But. BUT! (But not butt.) We both know she can swim faster and she asked me to help. I see no reason she can't swim as fast or faster than I do. So much better streamlined leading to less drag, higher muscle to cross section volume, to say nothing of younger with a still functioning metabolism.

As a general rule, most people have several things wrong with their stroke. Sometimes it's a muscle weakness, sometimes it's a range of motion issue, and some simply don't know better. But the big thing most people do wrong in freestyle is thrash their arm forward with a plop, let the elbow sink for a while, then try to grab a handful of water and drag it to their hip. It hurts my soul to see this happening, so I try not to look.

Of course, only the best is good enough for BRBE. She gets a detailed analysis of what needs to be fixed. The first thing to work on is elbows and catch. Then elbows and catch. Maybe something else and back to elbows and catch. She is going to get sick of me talking about high elbows, water feel, and the subtleties of the catch. We might go into the teach pool to swim in really shallow water and see if her manicure survives.

The plan is to take apart BRBE's stroke right down to the fraction of a second then build it up again to be more efficient, stronger, more friendly with the water, with a side of a Jedi swimmer mind trick. There is something to think about every fraction of a second, and usually multiple things going on at the same time. It makes for complex explanations sometimes. And people wonder why I'm never bored swimming.

Last week was the introduction, as it were. Today was the first working day. She says she's having fun and the big grin backs that up.

No, there are no current photos or videos of her swimming. Maybe later.