The road to nowheresville. Or not, maybe.

I'm pretty sure only one of my readers knows where this road goes, and that's only because he was standing about 10 m from me, camera pointing in a different direction. 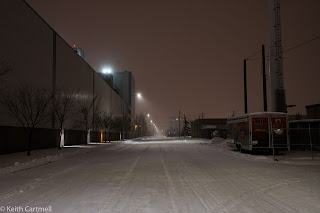 Doesn't look very inviting does it? What's hiding in the snow where the lights stop? Yet there are a few tracks in the snow, so someone else thought it was worth driving, or maybe whatever's lurking down there ate them and is waiting for you. It was only after I took this photo that I realized the road behind me was surprisingly busy with big trucks, and that leaving my car in the middle of this road probably wasn't the smartest idea.

I got several nice photos near this spot, out of the several locations we visited looking for interesting steamy industrial sites. More about them later. This is going to dive into a philosophical journey, so get your favourite beverage and buckle up. Yes, I'm working on a coffee already.

Anyone ever ask you what you want to be when you grow up? Of course they did. But it's a loaded question. Let's pull it apart and look at it.

*What. Implies a singular definable outcome. Life is more complicated. Some of the what's I've been didn't exist when I was a child.

*Want. Implies the ability to form a desire for a change beyond the mere biological. That you can somehow see all the available choices along with their consequences, and wisely choose between them.

*To be. Implies a future state where that change will or could happen. That you haven't achieved your current wants, or that the current wants are somehow inadequate. That you'll still be alive.

*When. Implies that you can write a schedule for life, that what you want can't happen now. When implies knowing that a time has arrived, when all too often we only know that it's gone. (You guys can all hear in your heads the famous Pink Floyd song here, no need to quote it.)

*Grow up. Implies a more desirable state than what you are in now, that we all want to be grown up. Mature. Adult. In charge. Implies it's a recognizable state, and that one is, or isn't. Bah! I say BAH!

For the record, I've never known what I wanted to be when I grew up. Ever. I still don't. For a while I wanted to be a pilot like my dad, but my eyesight put the kibosh on that, and just as well. I trained to be an Air Traffic Controller at what was then called Malton International (You might now know it as Toronto Pearson.) but flunked the meteorology part and declined to take the remedial training. I'm pretty sure my parents thought I'd be living in a cardboard box under a bridge after that.

I've had a bunch of jobs over the years, and don't intend to bore you with a list. But there never was a plan to go to that school to get this degree and get a job with a particular firm and earn a particular job title to bring home the big dollars. I think I knew even then that life was more complex, and there were computer curve balls coming that nobody had thought of. Remember what I said about Sears yesterday?

There's another phrase, "I'm just making this up as I go along!" I forget where I heard it first, but if there is a catch phrase to my life, that's it. I think if you map out a path to a desired destination, 2 things are mostly likely to happen. One is that you'll find the path doesn't go there, or there isn't there anymore, or you get hip checked off the path into the weeds. Two is less likely, but if you're really determined you might be able to force the path to go there, or you bushwhack your way to your goal only to find it wasn't what you thought it would be. I admit the possibility of three, where the path goes where you want, and it's what you wanted and you're happy, but it seems awfully dull to me. One of the big problems with mapping out a path is that you start overlooking the other possibilities.

Let's go back to number 1, the weeds, or 2, the bushwhacking part. They're both the same, really. This is where it gets interesting and you find out who you are and what you're made of. Keep in mind the journey is more interesting than the destination. Explore along the way. Sniff the weeds, they can be pretty too. Help someone else that's hung up on the thorns. Enjoy the people you travel with while you do, and wish them well when they depart.

Yes, you need a goal to keep moving, otherwise you'll just sit on your butt watching everyone pass by, or wander around in circles. But goals are slippery things. A goal that's right at one point in your life might not be at a later point. It might be appropriate to let that goal go, in order to chase a different one. Or maybe not. It's hard to know. I say focus on the path and keep moving forward, rather than getting fixated on a particular goal or place. The world will change around that goal or place. Sears.

Some people like to go down the broad paved path with lots of other people, and it can't be a surprise when they end up in the same place as all those other people. (Which leads to a side thought about knowing someone by the people they hang around with. Stay tuned.) Maybe you want to explore the smaller paths that twist and turn, and you have to watch out for pits and tentacles, and you aren't really sure where you'll end up, but the views along the way are awesome. I'm one of those people on a twisty turny path with not many others around. On the job I've often been the only one that does what I do, and it's complicated to explain to people. Oh well. Explanations are over-rated.

There's an active role for you in all this. Each path has choices. You actually have to put one foot in front of the other, and keep moving and deciding. Every day. There's no escalator involved, unless you were very unfortunate in your choice of parents. Taking a rest to enjoy the view or to sniff the weeds/roses is fine, but don't sit there too long. Something will come along and eat you. Might be a bear, or a politician stealing your pension.

Year end is typically a time to look back and reflect. I see the choices I made along the way, and the choices that were made for me, and it's all worked out pretty well. There's a few things I wince at, of course, but they were learnings too.

Sometimes you just need some perspective. That shot up above, appearing to lead to nowhere? When I turned around there's this. An interesting building doing a useful function. Or it will, I'm not sure it's been commissioned yet. 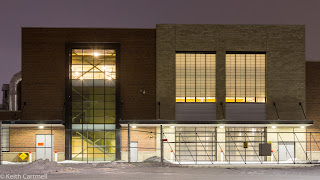 Walk your path. It might not be the ones your parents, or teachers, or friends walk. They're not you. Maybe you seem to be doing a bit more bushwhacking than others, or it seems like a scramble at times. Enjoy it. All of it. It's easy to enjoy an easy downhill grade with a nice view and the sun shining, but there's also the joy of getting through a tough patch and knowing you're stronger for it.