Most of you know I like shooting things close up. I like to take the 100 mm lens and get right up in the flower's little face. Then I got some extension tubes and got even closer. I've gained a whole new appreciation for the beauty of flowers, and the detail that is beyond my vision.

The next step is a specialized macro lens. I'd looked at reviews for the Canon MP-E 65mm f2.8 Macro lens and while I won't say I was spooked, all the reviews say this isn't a lens for beginners. That there's a learning curve. I decided to hold off for a while and have fun with the extension tubes.

Then a buddy contacted me and offered to sell the lens and flash system to go with it. Such a deal for both of us. He doesn't have the time to use it, and I save some $ over buying new.

Here's the first shots. All of these are straight out of the camera, absolutely zero processing in Lightroom.

My 100 mm says it's 1:1, and I'm not sure that's exactly true, or if it is, it's just barely and only under absolutely optimum shooting conditions. The 65 mm starts at 1:1 and goes up to 5x magnification. So  imagine that you want a photo of something, say, 4 mm long. A flower part, or a cooperative insect. For my American readers, 4 mm is .1575 of an inch, or about 155/1000. If it holds still and I get the focus right, at 5x it will take up 20 mm of my sensor that is 22.2 mm wide. It will fill the screen, and if I've nailed the focus, and the depth of field, and the lighting, the results will be breathtaking.

I'm at the point where I can just see the beads of pollen on the plants. At 5x they're going to look like small rocks. Can't wait!

Here's my first shots with the lens, just experimenting.

This is with the 100 mm lens, aiming at that dimple in the middle of the red patch. 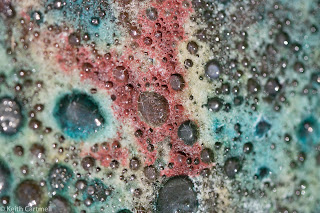 Now with the macro lens. This is 2x kind of aiming at that same dimple, hand held. 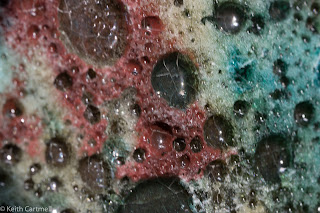 This is 3x, hand held, getting lucky with focus. 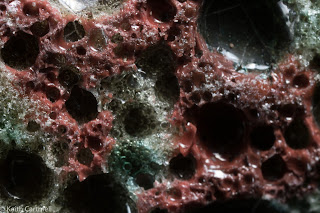 My tripod isn't quite flexible enough to reproduce that shooting angle, so I picked something else. The intent was to slowly dial in and stay focussed on a particular spot, but I had to move the tripod slightly between shots, even with the slide rails. I found that the flash units project out beyond the front of the lens a bit, and this is a large flat surface. Again, there is zero processing in Lightroom. 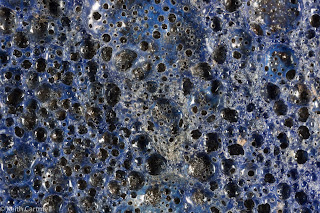 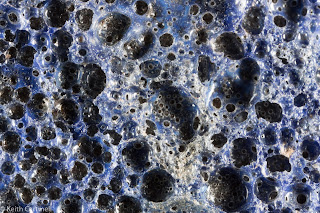 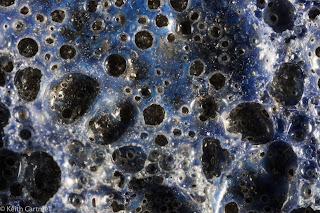 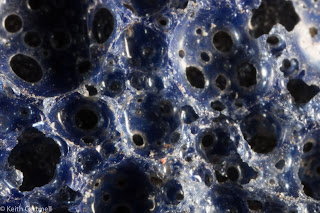 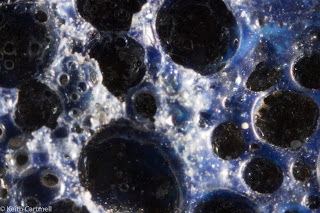 I admit to being encouraged by these first shots. 5 acceptable shots out of 9 (nine!) on the tripod. Admittedly, this isn't moving, so that's half the battle. I think I'll work a bit more on other stationary objects before trying flowers. Stay tuned!