These cosy up to the macro line in some cases, but I don't think cross over it. For the purposes of my blog going forward, if something is shot with the 100 mm lens by itself, it's not going to be considered a macro shot. If an extension tube is between the lens and camera, I'll call it a macro shot. And of course, it's a macro shot if it's the awesome 1-5x macro lens.

Sometimes a shot is so good I'll want to put it on the blog right away. Sometimes shots are pretty good, but what with one thing or another don't get added to the blog. In some cases I've got a series planned and I get a little distracted. (As a hint, stay tuned for the black lily.)

Or I'll have some good ones that go together, but I don't want to include others since they don't fit, though there isn't anything wrong with the shots. That's what this is, a round up of the various insect (mostly bees because there's so many of them) shots over the last little while that haven't made it into my blog. Since I don't have a system for looking at my folder of images and knowing for sure what's been used, I may repeat myself. How you suffer.

Sometimes when I'm out shooting flowers, I get lucky with insects. I think this first one is a fly. We were looking at that huge dent in the left eye, wondering if that's natural or otherwise. 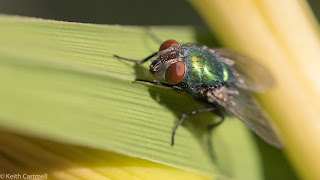 I got this one a few days ago. The bees love the dahlias. 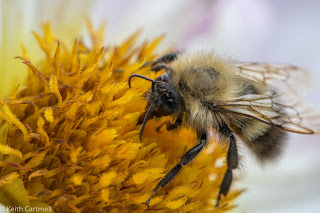 This moth was having a snooze, I think. I got some shots, then as I was moving to get in closer my shadow went across it, and it was gone. Note to self. 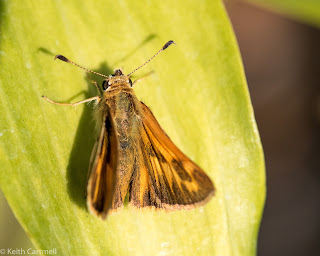 This bee didn't mind me clicking away. 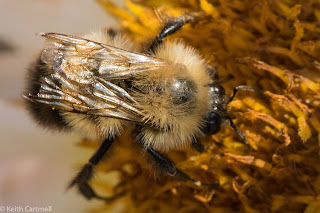 Posing the good side. 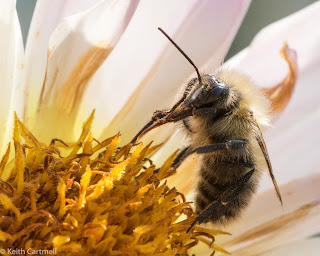 I wonder sometimes what the bees think of us, if they even notice us as all. Here I am, plainly in view, but that doesn't get in the way of work. 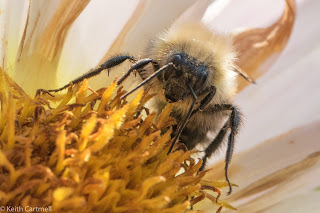 Liftoff! Just as I clicked the shutter. I call a mostly in focus shot of a flying insect a success. Maybe one day I'll look back at this and sneer, but if that's the case, I'll be called the bee whisperer. 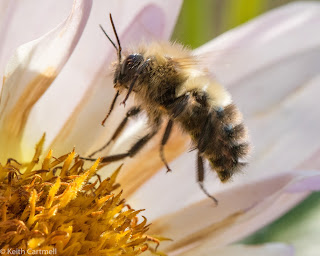 This was during one of the Fish Creek walks. 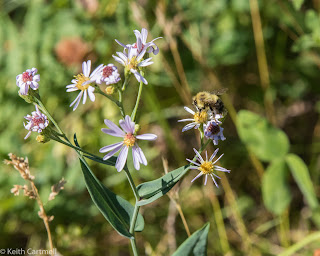 I alluded to these two shots a while ago. This little bee floating over the huge white poppy sort of reminded me of a little spaceship cruising around looking for a landing spot. 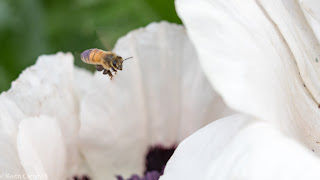 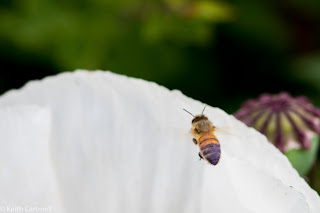 Another flying bee. A slightly distant shot but I liked the composition, and the bee is slightly out of focus so I didn't want to crop in. 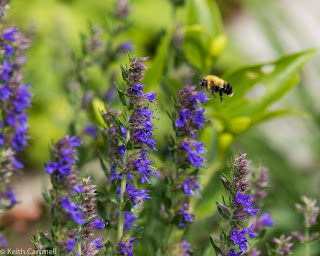 Shortly after these two shots another bee joined in, and they made a spectacle of themselves. That shot shows up in this post, and I'm sorry, but you'll have to deal with a couple shots of Curtis first. 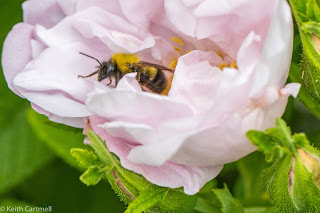 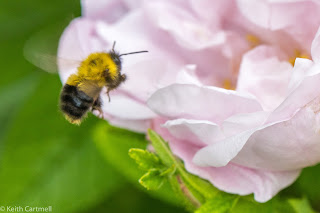 Email ThisBlogThis!Share to TwitterShare to FacebookShare to Pinterest
Labels: Insects