Most people don't understand how slowly the world changed up till about the Italian Renaissance, with the changes gathering speed till roughly the Victorian age, when it just exploded, and it's still going on.

Imagine trying to explain our world (an iPhone, for example) to your grandfather's grandfather. My father's father was born 1903, his father's father would be born about 1830 or so. Railroads and steam ships were new things rapidly expanding. Electricity was known of, but it wasn't a useful thing yet. Think about that for a while.

The collective impact is still right up in our faces every day. How often do you hear someone say, "stop the world, I want to get off for a while," and how often have you thought that? When was the last time you used a pay phone, or even saw one? Bought a paper newspaper? Opened a paper encyclopedia, or even a paper book? Driven a car with bias ply tires? Listened to a wax record played by a record player? (Though I understand these are coming back.) Looked at a paper map? I could go on. 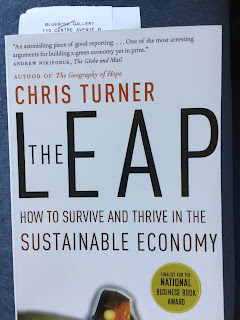 I'm only a few chapters in, and I'm fascinated. He has clearly explained how much of what we are seeing in today's world is the thrashing of dying industries. The world we've built for ourselves is no longer working for most of us. Even the super-wealthy can't eat their money if the economy collapses because we've made our world unfit for habitation by anything except rats and cockroaches. (No, that's not a metaphor for lawyers and investment bankers.)

He is saying we need to make a fundamental leap to a new way of thinking about our economy, and points out what's involved. He uses the Erie Canal as an example. It was widely regarded as a folly before construction, but was making money before it was even complete. It made Chicago and New York the cities they are by reducing transportation costs by an enormous amount.

Now look at what people are saying about building infrastructure to capture energy from the wind and from solar power. Then look at who employs them, and what industries they come from. Remember what I said about the thrashing of dying industries?

Photovoltaic panels and batteries are getting cheaper practically by the day. One of my buddies has a solar panel on their roof. I haven't discussed the economics of it with them, but some days they sell power back to the utility. Think about how much less fossil fuel we'd have to burn to generate electricity if every home had a solar panel on the roof, and a modern battery to store excess power, and a smart meter to decide when to sell power to the utility, and when to shift household electrical load for maximum efficiency.

It's happening now, and we're only getting started on the growth curve.

I'm not sure what else the book is saying, but can't wait to read more. In fact, here's a quick photo to hold you over. I want to read more, then up early over the weekend to be the event photographer for the Chaparral events, a kids of steel, a swim race, a stand up paddle board race, and 3 different triathlon distances. If you're there, and I know at least one of my readers will be, take a moment and say hi. 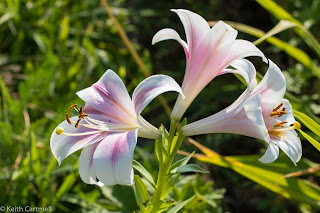