Every now and then I get attached to things. They don't have to be big expensive things. There is a key ring that slides together and slides apart that is the last thing I bought in Ontario (aside from gas and snacks) on the way out to moving here. That was in 1980. Still in daily use.

Some of you know I was really conflicted about letting go of my old iPhone 4. It still worked, mostly, and was still an amazing device. I kept it so Linda could use it as a camera, and that turned into one of the funniest videos I've ever seen. Then a buddy needed a phone quick, and I was happy to sell it. I was far happier with it than I was with the current phone, an iPhone 6. I've had it a couple years, and will really have to think about what to get to replace it, but I won't miss it.

I found I was surprisingly sentimental about these. 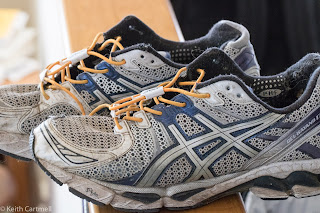 Why, you ask? These are shoes I did Ironman Canada in. I ran in them a few times after, then retired them and used them as yard slippers.  I just about twisted my ankle in them the other day going down the stairs. They weren't quite on, and I can no longer slide my feet into them without using my hands. They are beginning to come apart in places. They are in the recycle bag of old shoes that I'll take back next time I buy running shoes. They served me well.

Probably the biggest most expensive thing I miss is our 83 Accord hatchback. Best car I ever owned by far. It ran and ran and ran. It once started after a weekend in -40 C temperatures, when only one other car started, a winterized jeep. Once it warmed up enough to move, we spent most of the morning boosting other cars. I could fit the most amazing amount of stuff in it. There was about 340K on the clock when the dealership told me the mounts for the springs were rusting out and the repairs would cost far more than the car was worth, and oh, by the way, if the insurance company were to find out they'd cancel your policy. Best to buy another car, and no, you won't be able to trade it in. That lead to us getting the 95 Caravan. Nuff said there.

If I could get that 83 Accord again as a brand new car, I'd happily drive it again. It probably isn't as good a car as the current Honda Fit, and is certainly less technically advanced, but it was fun to drive. Plus, it would not have that never to be sufficiently damned "infotainment centre" as these things are called. I hate it. All too often it gets all confused in the head and thinks my phone is making a call, and won't hang up. The only solution I've found is to shut the car off. It's infuriating.

We had a major project come to completion last night. I'd had several of my photographs printed, and I ordered a rail system to hang them so I wouldn't have to fix holes in the wall every time I wanted to change artwork. It took a while for the one part to come, but here we are. 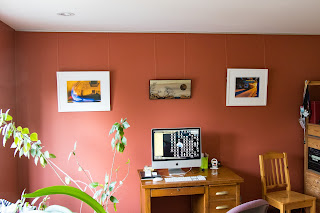 I was out trying to macro shoot more bees, but wasn't having any luck. There was the faintest hint of a breeze that moved the Dahlias just enough. I've got some other shots where I could prop the camera against something. That makes it much easier. This is part of a thistle at about 4x. I've got a few nice one's of a little Johnny Jump Up, and they'll show up on next macro Monday I think. 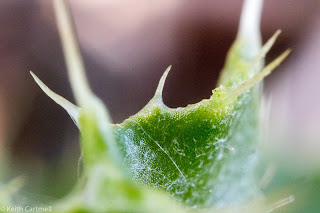 I had the weirdest dream the other morning, thinking the neighbour's apple tree had collapsed on our fence. When I looked out the bedroom window, it sort of looked collapsed. When I checked it out a little later I realized the boughs were just bent because of the weight of the apples on it. I'll bet this is the sweetest one. 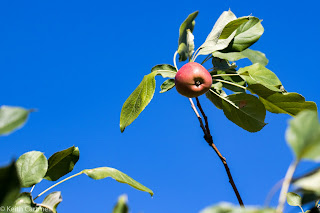 Curtis, of course, wanting out. He knows perfectly well that door leads to outside, if only he could persuade me to open it for him, or figure it out for himself. 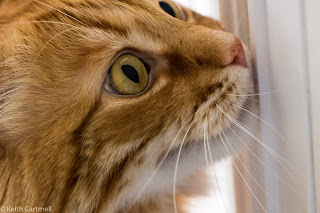