A bit of a mixed bag for you macro lovers here today, with a reward down at the bottom. These were taken at various times over the last week.

A neighbour hankers to have a photo of a sunflower up on his wall, so he bought some at the supermarket and dropped them off the other day. It was fun getting some regular shots of them, but the one I like the most, at least so far is this 3.5x shot. I'm not sure what those are tiny little beads of. (Though there was one in yesterday's blog that is even more amazing, since I didn't even know the bee was there till I saw the photo on the computer screen.) 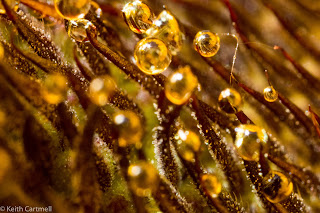 Some fabric mesh at about 1.3x, using an extension tube on the 100 mm macro. 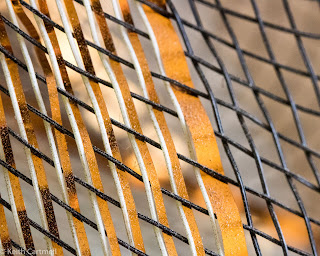 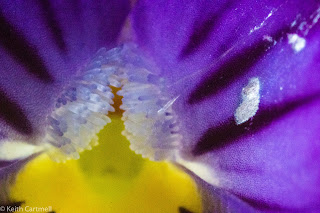 Artemisia at about 4.5x. I sort of think of this as a baby lake kraken, dreaming of taking on wet suited  prey. This was kind of fun. The camera was stable, and I gradually focused in, seeing how it changed at different magnifications. This might be a good place to try focus stacking, though I've got some photos of the sunflower I want to try that with. Maybe later today, in between all the other stuff I want to do. 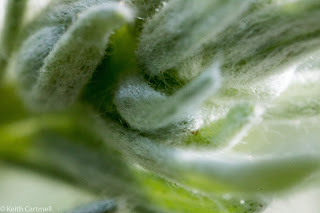 Settums at about 3.5x. It took a while to get focused in on one that was open. 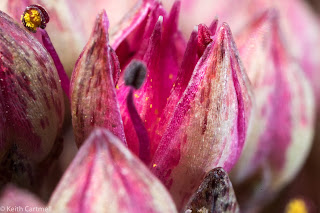 White geranium, the barely visible stamen at about 4.5x. 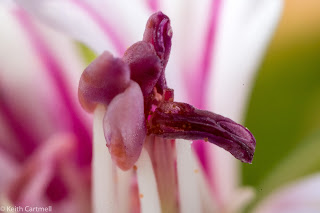 The centre of an English Daisy looks sort of nubbly to the naked eye, but at 5x these remind me of the Alliums. 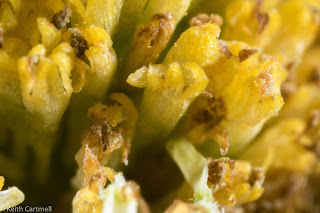 All of these (except the extension tube shot) are done with the camera on the macro rails, but the rails  themselves are sitting on the ground or something firm. I really do need to get a small, but stable tripod good for shooting things close to the surface. The camera, lens, and flash weighs just over 2 kilos. (Any suggestions from my photo buddies?) Free handholding this kind of weight when you need to be within a mm or so of the focus distance, and you're aiming at a spot that's only a few mm on a side is nearly impossible.

Although, there are exceptions when you get lucky. I did this Sunday morning as I was out scoping out the flowers, and getting ready to shoot the sunflowers. I think this guy was napping so it didn't notice or mind the lens in it's face. Taken at about 3x, no cropping, HANDHELD! This is almost certainly going to be my August image of the month, and is a strong contender for 2017 image of the year. 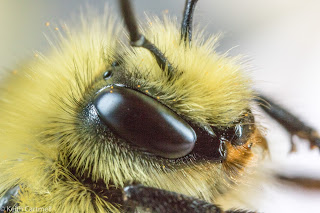 The other thing I was thinking of is seeing what I've got around the house to build an improvised thingie to mount the macro rails on, that allows the camera to be moved easily into any position, and itself mounts on something sturdy. The bike stand is a possibility. Any suggestions from the macro community?