Back in October and November my work had a track your steps contest. I didn't win, though I was quite pleased with my steps total. I didn't even make top 3 in my building, and they didn't make top three compared to the other building. I think there is a marathon training crew over there. In any case what is important about is that I was happy with my activity levels, and I got a $100 Sport Chek gift certificate.

Then a little while later I entered an on line contest over at Running with Spatulas and won another $100 Sport Chek gift cert. At first I had a bit of trouble spending it, what with not seeing anything I liked at the downtown store. Then trying on some running tights at Chinook, and being sent down to Southcentre for the next size up, which they didn't have.

I'd been doing a bit of research, and after discussing with Neil yesterday, I was minded to get the GoPro 3, especially if I can get my buddy Mike to give me lessons. I'm not sure how much I'd use it, but he assured me it was an awesome camera for video and stills, much better than the iPhone. Today I went up to Market Mall, determined to spend my $200. They only had the GoPro2. At first I wandered around in a daze, but ended up trying on some tights that I eventually bought. There is an Under Armor base layer, and a slightly looser pair that I think will be good over top of the Under Armor layer for snowshoeing and generally being outside when it's pretty darn cold. I will have to experiment a bit. The top layer does not have flat seams, which leads to chafing in a sensitive place. I think it will be ok as long as I have a layer under them.

Just getting to the store was an exercise in patience. Normally Calgary drivers are an impatient bunch, zooming along, cutting people off, and generally charging ahead as if they were late for the rapture or something. I can cope with that. Not today. It's like they were on drugs, reacting seconds after you would normally expect. I was just about hit in the parking lot by a guy driving along, looking the other way for a parking spot, and not noticing my car. I was about to put it in reverse to get out of his way.

The people in the stores weren't much better. I was bumped into twice by people looking the other way as they shambled along. Not just a bump like when two people know each other is there, and are trying to squeeze by. This was a full on bump, with me standing still, and them walking into me. At least one of them was cute.

If you see my Facebook page I alluded to an adventure with electricity. We have a lamp illuminating the space under the stairs where the cat boxes live. It had stopped working. I was going to wire in another light for that space, and on the way home picked up the electrical box I needed. I strung the wire and commenced severe frustration. My screwdriver is one of those that can ratchet either way, and no matter which way it was set, I needed it the other way. When that happened I usually had one hand holding something to be screwed that wanted to move. Which it would do as soon as I let go of it to fix the screwdriver. In the end the light didn't work. I think the fixture itself is broken inside. I was very cranky about that and since I'd got the lamp to work in the mean time, the whole thing was kind of not necessary, so I then had to go through some of the same pain to leave it in a safe condition. There was much bad language, and one cat was banished upstairs for the crime of supervising from underfoot.

One needs to be careful handling live wires. At one point I shorted it out against the box. This burned off enough wire that the piece I had cut is no longer quite long enough, so I essentially have to start over. Which I'm not going to do today. Part of the problem is that I have to turn off the breaker for the sensitive work, and that breaker controls all the lights in the basement. Good thing I have a wind up flashlight.

Shortly after having a calming glass of wine I BBQ some very nice tenderloin beef in a specialty Linda marinade. Very tres yummy! With baked potato, and organic corn, with a lemon tart for dessert. Sorry about the lack of pictures, I was too hungry.

I left the details of the run, and the new updated run meter graphs for the end, because I know some of you are not interested in that. Before you go, you can comment, leaving a word or two for my 28 word collection. Please and thank you.

It's been about a week since I last ran, and I was getting a bit itchy about it. Limbered up and stretched a bit, then started off on a walk. I ended up running 4 K, at least some of which was about the pace where I left off, but the last part of that was getting a bit sloppy. What was interesting was that the Runmeter graphs have changed. Here's what I get now.

The map is a bit smaller than it used to be, much wider than tall, though I suspect it will resize as needed. 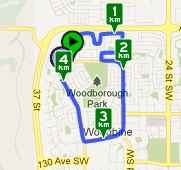 A summary, which is nice enough. 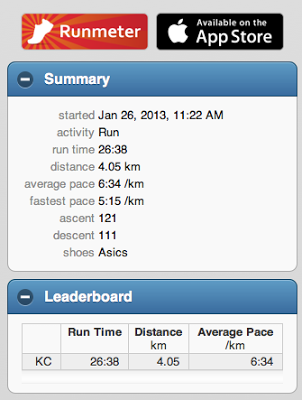 Here's the meat and potatoes. From looking at the elevation graph (the green) you'd think I was running in the mountains. The vertical scale is exaggerated a bit, and I think it's more than what there really is. The pace line (the blue) looks like it needs to be shifted slightly to the right to make more sense. But this is a typical run for me, a slow first K to get into it, then running a little over a 6 minute K. 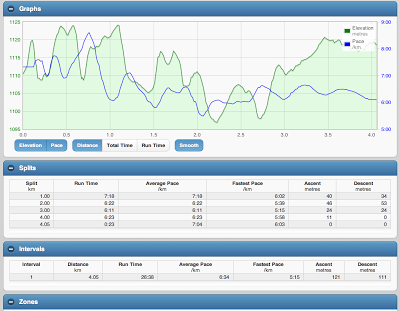 Towards the end I could feel my legs getting tighter, and my run getting a bit sloppier so I was happy enough to stop at the 4 K mark. I was breathing up near the top of my aerobic zone and mostly my feet and legs felt light and fairly happy.

Long stretch after, with 6 minutes of pigeon a side. Yes I timed it as I was reading stuff on my iPad. I'm such a geek.

Still doing research on a new TV. Still plugging way on my novel. Maybe if I'm in the mood tomorrow I'll post another snippet.