No such thing as bad weather, only poor clothing choices 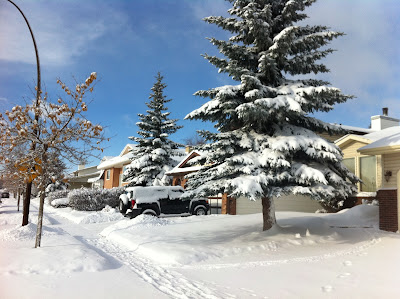 Although photo was taken yesterday, it looks the same now. Clear, sunny. Nothing wrong with it at all. Well, the humidity is a bit high. Ok, ok, I admit you aren't likely to find many people out working on their tans, but that hardly happens in August so you shouldn't hold it against November.

I didn't even have to dress particularly warmly. Here's the list.
Normal running shoes.
Normal socks. (same socks I wear all the rest of the time to bike and run)
Light shell ski pants. (I think they're made for X-country skiing with another layer under.)
Old bathing suit under ski pants. (I was wearing it for core, and saw no reason to change.)
Short sleeve tech shirt.
Long sleeve tech shirt.
Light fleece jacket with a hood. Hood was up.
Wool scarf wrapped around throat and neck.
Cap with visor. (same one I wore at IMC.)
Polyester toque.
Gloves.

Ran a hair over 40 minutes to cover a hair over 5 K. The tricky part about running this time of year is dealing with the slippery roads. The sidewalks are mostly shoveled. The roads are snice, mostly, except where they are full blown ice that you could skate on. Snice is just very slippery hard packed and polished snow, but you can't skate on it. When running on it you have to be very careful to land right underneath your centre of gravity, and you can't push off with a great leaping spring. Your core has to be engaged. Some people wear Yak Trax and if the entire run was snice it would be a good idea.

Before the run I warmed up with 45 minutes of core and stretching and leg exercises. Yes plank. My left leg has been a bit stiff lately. Worked on it a bit during yoga on Wed, then took a break on Thursday.