I almost ate a bird

Out the door about 4:15 this morning. I ran the anti-clockwise route shown here. As you can see, it's about 7.7 K, and today I did in the one hour called for by the IGP™, doing about run 15 walk 45 seconds or so. I walked about 5 minutes before, and the first part of the run was slow as it took me a while to warm up. Nice morning for a run, although I didn't see any wildlife except for one bunny in my front patio. Walked a few minutes afterward as well.

The run went well. I didn't feel fast, but I felt strong and picked up the pace a couple times when I noticed I was running comfortably and breathing was easy. The hill out of Fish Creek doesn't seem so steep as it once did, and it isn't as long.

I was thinking about doing the road to Nepal for my ride, but someone at work thought the paving was still happening. They're right. I pedaled out to where the long hill starts. There's new pavement going south, and there was a ton of paving trucks going back and forth. I decided I didn't need to get any closer. You can see the actual route I took this evening. 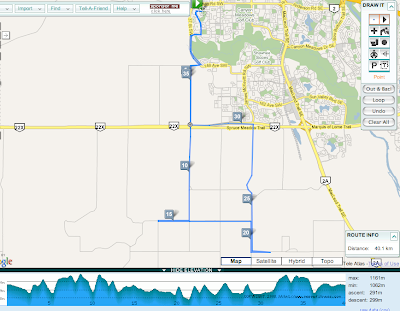 The wind was something else!! Holy Hannah! Gusting straight out of the west at least at 30 K. At one point I was riding with the wind at about 35, and could feel it at my back. Most of the pavement I was on south of 22X wasn't very good, except for 773 itself. I nearly took a spill on some gravel about the half way point as I was turning a corner. The wind caught me just at the wrong time. I enjoyed riding past some kind of horse event getting set up directly south of Spruce Meadows. No idea what it was, but there were some pretty girls doing stuff.

I was hoping to be out for 2 hours, and it turned out to be 1:50 for just a hair over 40 K. Average speed 22.4 K which isn't bad considering I spent about 3 hours pedaling into the teeth of the wind up the hill between Spruce Meadows and 37th. Most of that was on the drops and I can feel it in my guts now. Max speed 62 and nearly scared the crap out of me doing it. Average cadence 71.

The ride went pretty good, though I wasn't feeling quite as strong as I'd hoped for. I was having some pretty good twinges in my left calf off and on. Still, I did power up a couple of the hills, and had lots of gas left at the end of the ride to try to speed through the school zone.

I can hear Susi asking about the bird. Humongous crow. There were several of them on the road eating something that I hope was dead. I came swooping around a curve with the wind. They scattered, then one caught a breeze and it cut back in front of me. I think if I'd been reaching out I could have touched it. It looked a little startled and twitched it's wings so it went up and away. I was doing better than 50 Kph at the time and a face full of big black bird had NOT been on the agenda. The rest of the ride back was uneventful, except for it getting windier and colder.

Email ThisBlogThis!Share to TwitterShare to FacebookShare to Pinterest
Labels: Maps