That bee was giving me the stink eye

There it was, hanging out on the mint plant. Maybe having a nice post lunch nap or something. There I was, hanging a big lens in it's face, flashing bright lights. This is hand held, at about 2x. Embiggen it and you'll see the little hexagon facets it uses for eyes. 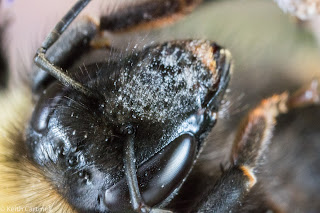 And a couple other shots from this morning. Tripod, about 3x and 5 x respectively. 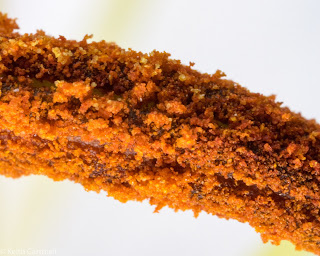 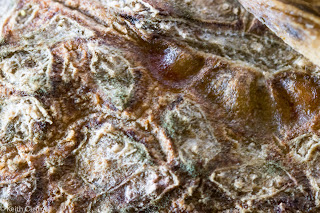 So far, I'm just happy to get a shot at a particular magnification that is in focus, and those are pretty interesting. Next will be getting shots that are nice photographs, that just happen to be macro.

This is fun, in a patient sort of way. One thing is counter intuitive though. I was trying to keep the tripod still, gradually zooming in and tweaking the slider rails for focus. I found it worked better to have the slider rails all the way forward, get focused in somewhere around one or 2x, then gradually work up to higher magnifications, while moving the slider rails back to focus. There isn't much room for error.

Out of 75 shots this morning, most were obvious rejects. 20 got a star, being generous, and only the 3 above actually saved. There are a few more that are similar to these, so no use developing them.

I'm thinking that the tool I need instead of just a tripod with the slider rails mounted on it, is to have some kind of arm like a desk lamp between the tripod and slider rails. Then mount the camera and flash on the slider rails. It probably needs a counter balance of some kind. Then the camera can go up and down, move in and out as necessary, with the slider rails for fine adjustment. The trick will be to have it snug enough that it doesn't move once it's where it's wanted, and yet one can still move it. If you know of such a thing, feel free to tell me.

I'm not sure how much the whole rig weighs, but it's at least 5 pounds. Here's a photo of the whole thing. Imagine you're a bee, getting that in your face. 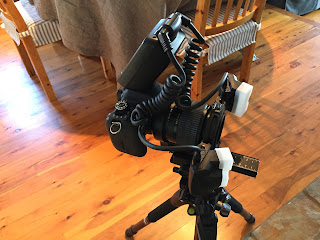