A bridgy sort of mood

Not abridged. No, you get the full version.

Just bridges inspiring some transitional thoughts today. First things first. After shooting downtown yesterday I took a scenic route home, checking some vantage points along the way. There was one I hadn't known of, where I got this nice panorama. (Look maw, no tower!)

From the same place I got this bridge. 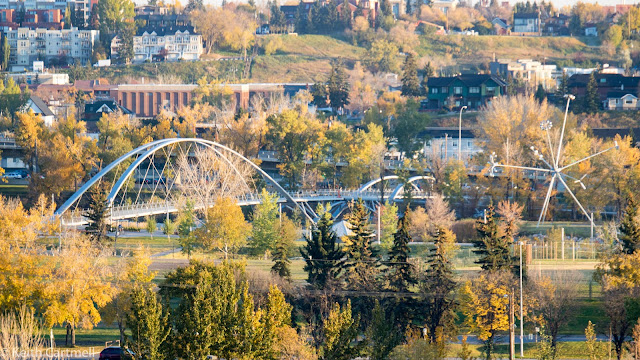 Then a little further along I drove through Brittania. There are some very swanky homes there, most of them being classy and elegant, rather than cheesy McMansions. Some of them have a stunning view of the Elbow River and downtown. If I were to come into a ton of money (and you'd need it!) and happened to need a home, I'd love to buy there. I digress, I got the other bridge of the day from there. 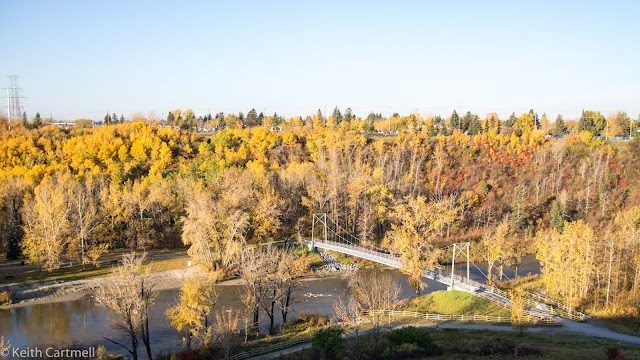 Yesterday afternoon I met up with some Penn West alumni for drinks. Some are working in their field, one has changed industries, one is looking hard, and then there's me. Technically on vacation, in that I told one project manager I needed a month of vacation. That's winding up and I'm awaiting news of that project. Perhaps they've found other people more eager to participate, ones that could start now, and I'm no longer involved. At least they could tell me. Or maybe it's taking a little longer to get everything lined up and they have no news for me. Whatever.

Without going anywhere I've had a lovely vacation. It's been a busy month! The running has sucked slough water this month, which I think puts the October marathon out of reach. I could probably finish it, but I've no need to suffer through to just finish a race. Yesterday's 5 K, 33:18 was the first good run in almost a month. My legs felt springy and strong. The Tuesday 5K, similar time still felt a bit choppy and feeble.

I've been out on a number of photo shoots and taken a zillion pictures. Many are slight variations on what you've seen already. What boils down to the one skyline shot where the light and everything is nice, might have taken several hundred shots at slightly different times as the sun rises. Then you can pick the best one.

What's interesting to me about the photo shoots is finding neat little spots that I hadn't known existed in a city I've lived in for 36 years. I'm loving all the different shapes to the skyline, and how different it looks as the light changes. I'll probably keep doing skyline shots for a while as a way to practice composing shots, doing panoramas, dealing with all the choices in an HDR photo, and trying to get the light just perfect. Plus bridges, and landscapes/cloudscapes, and flowers, and who knows what else might catch my eye? I find I'm looking at the world differently now that I'm thinking about what the camera sees. I've got some nice compliments on photos so far, thank you very much. Don't be afraid to leave a comment about what you like, or don't like.

When I didn't work much in 2009 I found that I was busy almost all the time. Part of it was looking for work, of course. I was beginning to seriously wonder if I'd ever work again, or where I'd find the time to do so. I'm having some of the same thoughts now. I'm liking being able to swim in the morning and not have to be at work right away. I'm liking to be able to meet buddies and have lots of time to choose from. I'm liking being able to do what interests me during the day (well, except for this tax paperwork thing, there's some serious procrastination happening) or at night. I've been up late a few times and might do that more for sunsets, moonrises, or aurora chasing. Even getting up early to catch a sunrise is fun when you're also thinking about where you want to catch it from.

So, yesterday, I knew perfectly well that I was too close and too low for a really nice skyline shot, and I suspected the vibration from the trains a few feet away might ruin many shots. Even so, I wanted to do it and see for myself. I knew the sun was rising behind me, and there might be some good reflections. It's all about the experience of trying different things to see how they work out, and what you think. Sometimes the result is "won't do that again", and other times it's "holy crap that was awesome!"

The novel(s) have been on pause for this month, but I think things are coming together in time for a run up to NaNoWriMo. The mysterious behind the scenes villain has been making some noise in my head. Something one of the panelists said at WWC is "remember that the antagonist or villain is the hero of his or her own story." Stay tuned. Anyone else taking a run at NanoWriMo this year?