Be the best lettuce photographer!

What an amazing weekend!

Friday evening, getting some theory and doing some star shots. I learned the trick of using the live view screen to focus to infinity properly. One of the best pieces of advice from Neil is, "Shoot lettuce if that's what you love! Shoot it chopped, shredded, with the Calgary Tower, whatever makes you happy. Be the best lettuce photographer."

Saturday road trip to shoot a deserted farmhouse and grain elevator, several scenic panoramic outlooks, a ferry ride, and dramatic skies. In addition we were in search of dark skies and lettuce to shoot, but failed on that front. The clouds rolled in about sunset, and the lettuce was elusive all day. We had to console ourselves with a rainy skyline.

Sunday all day, importing photos into Lightroom and working with them. Basic editing. More advanced techniques. HDR in Photomatix. Panoramas. Assembling star shots in Starstax. Compositing in Photoshop. Plus all sorts of tips and ideas.

Most importantly, practicing with the photos we had taken. (I took 607 photos.)There are many different ways to use Lightroom to achieve various effects, and none of them are wrong, per say. The idea is to tweak the photo to match the vision for what you want it to be. This might to make it a better photo, looking as close as possible to what our eyes would see. Or you might want to to dress it up to emphasize certain elements of the scene, or de-emphasize others. Or maybe you like the look of Mordor skies as applied to a placid Alberta prairie landscape. Maybe you want your lettuce to look really really green.

This course was superb value for money! We were all a little disappointed that we didn't find clear skies, but that's the weather for you, and that's the only letdown of the weekend. I'm now happily playing with images, learning what more I can do with them.

Here's a couple of panorama examples. These have been slightly dressed up to look better, but really the main thing was getting them stitched together to look nice. You might want to blow them up to full screen. The way I took the second one gives the original a huge amount of detail that only comes up when you zoom, but then the original is 28 MB. When I get a few minutes I'm going to put it on the TV and see how it looks. I'm wondering how big I could print it out, though if I was going to do that I'd try to tweak the sky some more.

Here's something from Friday night, when it turned out to be the darkest skies for us. I'm glad we went out. 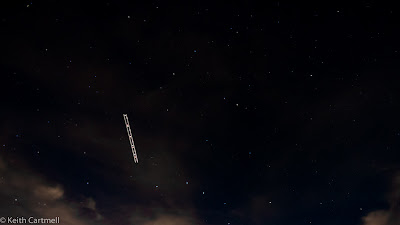 It looks a little like a ladder in the sky, doesn't it? In fact it's an airplane. The sides of the ladder are the steady landing lights, and the rungs are the blinking lights. I took many shots in two sequences and there's all sorts of stuff in there. Several airplanes, a satellite, and moving clouds.

Here's an assembled view of the other sequence of the photos, done to show star motion, two airplanes, and highlight the clouds a bit because they were a cool colour. 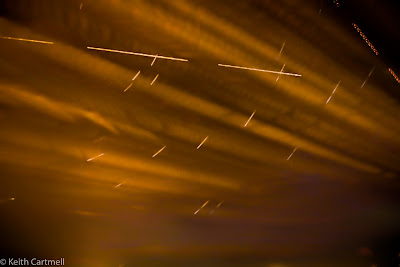 I've had one failure at attempting to move the photos into iMovie to show the stars quite still but the clouds moving across the stars. Stay tuned.

Now I'm just bubbling with ideas of stuff to shoot, places to explore, and ways to manipulate those images. So would you be if you had taken the course with us.

Email ThisBlogThis!Share to TwitterShare to FacebookShare to Pinterest
Labels: Canon