It was a good idea, but darned ghosts

This morning I found myself a few blocks down from where I often parked when I was working downtown, wondering what the sunrise would be like. There I was, happily shooting away, mildly astonished at the number of trains rumbling by. Exchanged waves with one train driver. Wondering what the vibration would do to the shots, since sometimes the whole Penn West building shook when a train went by. (It messed up only one, to my surprise.)

It was nice watching the sunrise. There was a bit of haze, and I had high hopes that I'd get that rosy background again. I did for a little while, then later the buildings got that golden glow that's nice if there isn't too much of it.

The good idea was to take one of the photos from earlier, with the rosy background, and combine them with another with the nice but not too much glow, and another with nice balanced light. The camera had been on the tripod for the entire sequence of shots, no change to the zoom, only to the shutter speed. What could go wrong, I thought?

As I was importing them into Photomatix I realized that one of the shots I wanted had a crane moved into the frame on the right. No big deal, I thought. It's called ghosting, where part of the 3 shots doesn't line up because something moved between the shots. Either I didn't do something right, or this was a really strong ghost. Even after importing, you could see where it was, sort of. Trying to correct it just made a bigger mess, then I realized the golden glow had got out of hand. While I was playing with it, wondering why it didn't look focussed, I realized the camera had moved ever so slightly between the set of shots. Back to the beginning.

I ended up doing two separate shots, one with the crane, and one without. One was shot just before sunrise, and the other just after it. You can tell me which you like better. 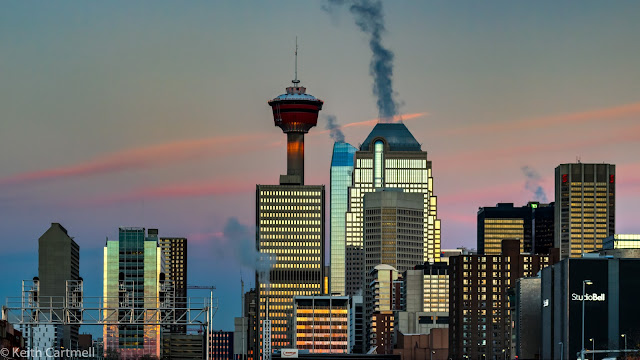 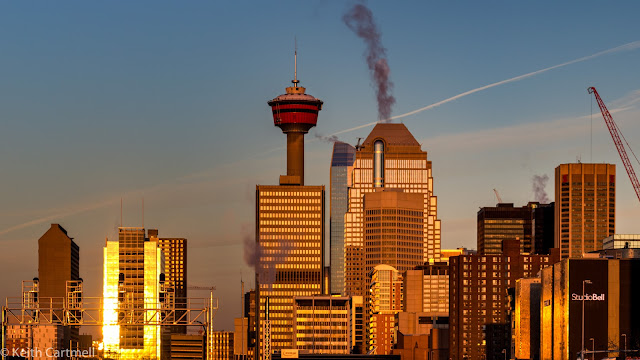