A change of life

My last day at Penn West was Aug 31. I have deliberately tried to think of myself as a retired person, rather than a working person on vacation. For a start, I don't (yet) have a job to return to. Not that I'm out there digging under rocks looking for one. There's been some expressions of varying degree of interest, but there's lots of ways for the wheels to fall off the various wagons before the paperwork is signed.

The first couple weeks of retirement have not been entirely unalloyed pleasure. I got a sniffle as a departure present so I was fighting that off. There was a 26 K run scheduled for the 3rd, and I bailed out at 22 K. From then till now the running has essentially been a no go zone. I don't think I actually injured myself, but I do think I was right at the ragged edge. My running mojo was in the middle of that zone where I couldn't get at it.

Other things happened as I gave my legs a break. Lots and lots of photos, some blah, some good, and some spectacular. They haven't all made there way to this blog, but some will, at least one a day. You may have missed yesterday, a skyline shot from the west, since I posted it quite late in the day.

Naturally I've been taking some time for reflection. Lots of people think of September as a time of new beginnings. A new school year. Coming back from vacation. Lots of people schedule new jobs for a September start after the kids are back in school. Money managers in various corporations look at their budgets and decide if they are actually going to spend, because now is the time if they're going to at all. Moms with kids going to school get together with their mom buddies to have a little celebratory freedom drink, then get down to the serious business of whatever it is that newly free moms get up to. It's probably best if their husbands don't know. I know some moms read this blog, and some might have kids that age. Feel free to comment!

The trees are changing colour here, meaning lots of golds, yellows, and almost orange. Not much red. Still, it's pretty spectacular. 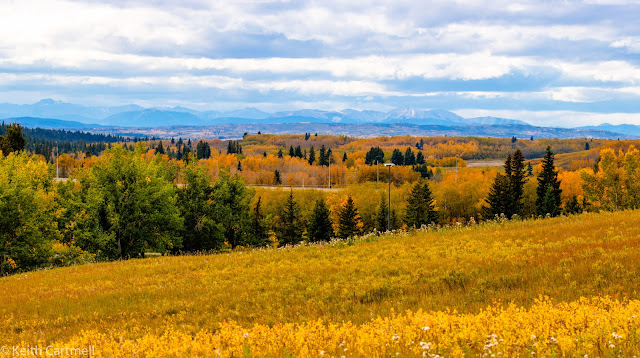 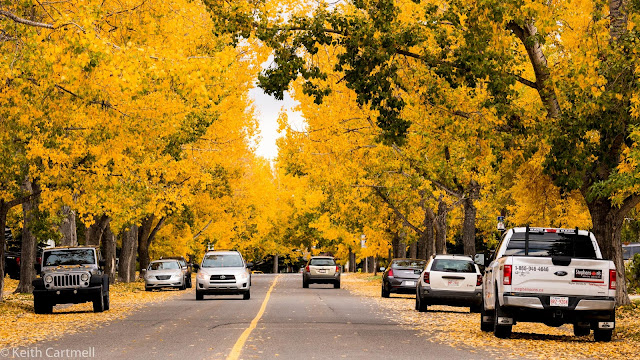 The other day while rolling and stretching I got a huge thunk from my back and things started feeling better. There was a baby 3K easy run that felt pretty good, as did an easy spin on Thursday. Today I was itching to run, and ended up 5.5 K around the neighbourhood with my run buddy. We were forced, FORCED to stop and admire the view of Fish Creek. (Assembled from 7 individual photos, the resolution in the original is amazing.)

Since the clock wasn't running, we didn't mind taking a minute. That's been my mantra just lately, it doesn't matter if things take a few minutes longer. Unless it's traffic on the way to a place to watch a celestial event. Then minutes might matter.

So far I'm enjoying it, sniffles aside, and I'm glad that's ovre. The run felt good, and stretching after produced another series of good noises. I am hopeful I'll be back in the running groove soon, though I'm not going to push for the October marathon. I've seen too many buddies injure themselves trying to come back too fast, too soon, too hard. Not me. I'd rather settle into good volume, quality runs, and postpone a marathon till next year.