Not out in the cold dark after all

Last night I decided to take advantage of the clear "dark" skies to have another go at the star shots, even though it's nearly a full moon. Here's a shot of my surroundings, shot in available light with the real camera. Why yes, I think that's a sour gas well, why do you ask? 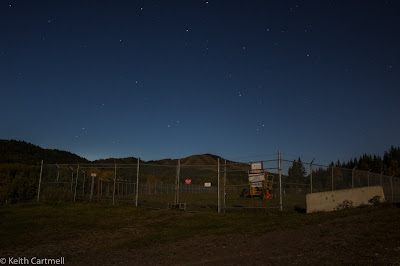 I consulted the trusty Photographer's Ephemeris app and got into this screen. One is a zoomed in version of the other. 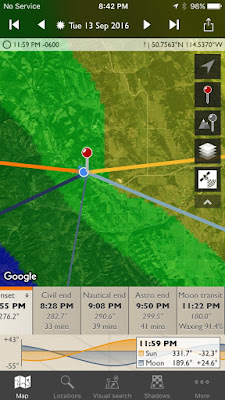 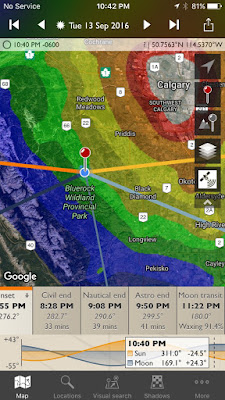 Those rings of colour are an expression of light pollution. Where I ended up was way west of Millarville, about 45 minutes from here. You'd think it would be dark, but no. The moon was bright enough to cast a strong shadow. If I'd brought a book I would have been able to read. As far as I know, there are no communities west of there, yet there was light on the western horizon, even after astronomical dark.

If I'd gone a little bit further and turned left, I'd have ended up in the dark green, maybe the blue, but I've no idea what the road is like. As I was looking later it says the skies south of Longview are dark. Maybe I'll try that in a couple weeks during new moon. Any of my photo buddies up for a road trip?

I got set up and after a few misteps let the camera do it's thing. I saw several airplanes, and what might have been a meteorite or satellite. I'm not going to be sure what the camera saw till the computer finishes processing the images. It's still chugging.

Here we go, 4 airplanes, 1 that might be a satellite or airplane way up high (look for the faint line top right to centre), and 4 what I think are meteorites (look in the bottom part of the screen). Essentially anything that has a circular motion is a star. Any other lines are something else. 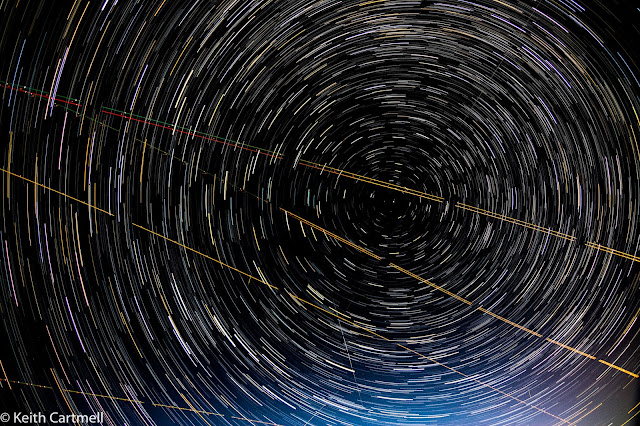 Pro tip, clean your screen when you're going to be working with star images. Just saying.

For a first try I'm pretty pleased. The hi resolution version is very nice. All I did was point the camera directly away from the moon, set it to keep taking pictures, and let it run. No composition considerations. Nothing special done to it in Lightroom other than tweaking contrast and haze. Next is to have another go at importing the photos into iMovie or another app that will display them sequentially like a movie.

I did a few other experiments that didn't turn out quite like I thought they might, but it's all a learning experience. One thing was a surprise, I hadn't thought about cell coverage. I was getting 1 bar of 3G coverage, which is pretty pathetic. Maybe that's the case everywhere there is dark skies. For a summer evening with no wind, it was pretty cool. I think I'm going to wear a heavier coat, and maybe bring gloves. I was wearing a warm sweater, a windbreaker, and my bowtie hat, and was almost warm for most of it. Just before leaving it started getting actually cold.

This is the first time I'd actually used the ephemeris app, and it's awesome! There is a ton of info presented to help photographers plan their shots. In fact there is so much I'm going to have to take another run at the tutorial videos. Knowing where and when the sun and moon will rise relative to your location, or any chosen location is a huge advantage to planning a photo shoot. It will even tell you where it is anytime throughout the day or night.

For no special reason (Hi Janice and Janet!), I looked at LaHave NS to see what light pollution was there, and in particular, for the cottage we stayed in last time. Pretty dark. Pity that it's sold and doesn't seem to be on the rental market anymore. I could quite happily have set up the camera on the deck for some great star shots. 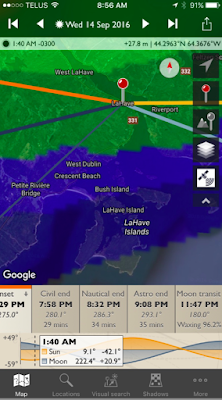