Autumn gardening in Calgary, and a rant

The plants have had a big year, growing tall, developing their roots and bulbs, and blooming their little faces off. That takes nutrients. Linda has noted the soil level has fallen quite a bit since the garden was planted, and has a plan. The delivery guy was helpful in dropping the big bags right where they were wanted. It saves me much wheelbarrow work. I am thankful. 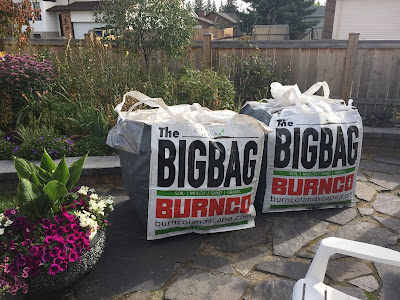 Plus we are starting to get frost at night. The white fabric is cheap. The pelicans help to protect the plants. 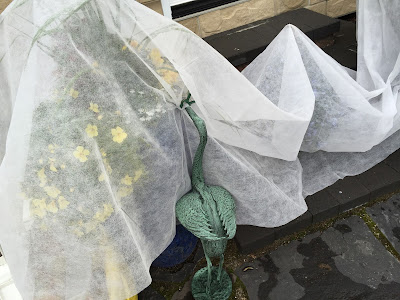 Here's some more plants all draped up. We have plans for Halloween to use this fabric. Hopefully there will be a little breeze, and we can send billowing clouds of the fabric towards the little trick or treaters. 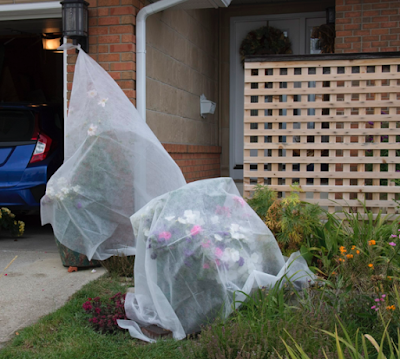 Others plants are still working on their blooms. I call them optimists. I'm not sure if they're behind because of recovering from the many hail storms, or they are late bloomers anyways. I am rooting for them, being a bit of a late bloomer myself. 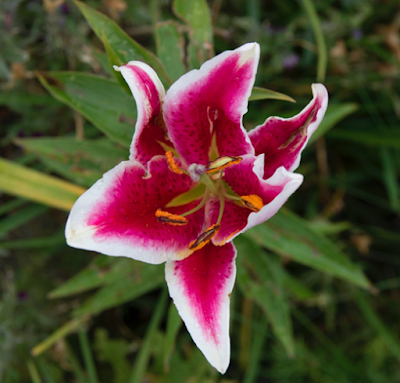 The big event this weekend is the photography course put on by the famous Neil Zeller. I'm so eager to go I'm already packed. 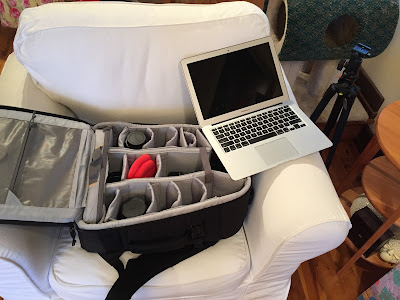 Lets see, what haven't I talked about. Oh yeah. Running. Last you heard we ended the 26 K run at 22 K. I've been hurting in an achy way ever since.  Twinges in hams and calves. I woke up the other day to spasming muscles in the back of my knee, extending down into the calf, and up into the thigh. Not hard and painful like a charlie horse, just little contractions that I didn't ask for. My resting heart rate has been elevated, and my sleep has been crap the last several nights. I suspect over training, or my body not recovering from the last workout.

Doing easy mobility work has twingy moments. The Tuesday swim was ok, but the water running after didn't last long. Fighting off a runny nose cold hasn't been helping.

The Saturday schedule calls for 28 K, and I'd been thinking of moving that to today. I don't think I can cope with staying up late (for me), doing a long run, and then going out for another late night, and then spending all day working with the images.

Now that today has arrived, I'm asking my legs what they think. 28 K is right out. In fact, I'm dubious about 10 K. Stay tuned.

I was into Chinook mall to check out the screen on the new 27 inch iMac. Along the way I saw this totally incongruous sign. 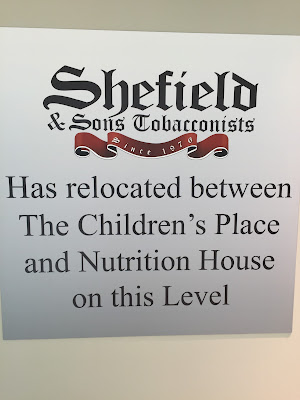 (Rant on!)
What's wrong with this picture? To start with, there isn't a lot we can do about the adults addicted to tobacco. I feel for them, and I weep for the impact it has on our so-called health care system. But we should be doing everything in our power to prevent people from getting the habit in the first place. Tobacco is a foul, noxious product that has absolutely no redeeming societal value, and should have no place in the modern world. None.

That said, it's been legal, and we need to deal with the consequences for much of the next human lifetime. Places like Shefield should exist to supply the unfortunate, under strict conditions. That should be the only place to legally get tobacco in any form. And those places should not be next to a child oriented store. They should be regulated similar to the places selling alcohol.  Test them by sending in underage kids, and if they don't check the ID, they are shut down.

I was thinking about the health care system as I woke up this morning. There is a whole wave of pre-geezer people that are going to be putting increased demand on the system as their bodies fail them. I'm one of them, healthier than most, but the path is inevitable. All we can do is manage how steep the decline is, and how many rocks are in the path. The health system should make this easier, and keep people out of hospitals.

Let's take automobile collisions, or as I like to call them, demonstrations of driver incompetence. DDI for short. One of the unfortunate side effects is cluttering up the medical system. People don't get killed nice and clean, oh no. There are whole teams of highly trained people devoted to getting the injured out of the mangled vehicles and delivered to a hospital. Some of them die sooner or later., how sad for them and their families. Some are injured to a lesser degree, but might take up a bed for much longer while they recover, and many never recover fully. In some ways that's even sadder. Even those not injured will likely be assessed, which takes valuable medical resources.

I've said it before, I'd like to see car simulators built to objectively test people's driving skills, and measure the lack. And boy do I see a lot of skill lacking, or the willingness to employ the skills, which comes to the same thing. You see it too, don't lie to me. Such a test every 5 years or so upon license renewal seems fine, and of course, after a DDI. We should be doing lots more to reduce the number of dead an injured, not just for their sake, though that's reason enough, but to lessen the burden on the health system.

We should be looking hard at people that are involved in any sort of a DDI. Those single vehicle "incidents" we hear about on the radio so often? If it's not a medical event, it's a DDI, unless you convince me the driver was distracted by some amazing event like a meteor strike nearby.  Changing weather doesn't count, this is Canada, the weather changes abruptly so drive that way. After a DDI the driver(s) involved should have to justify why they should be continued to be allowed to drive, and should have to pass an advanced driver safety course. The course and following drivers test should be marked by the infamous Russian judge.

Just yesterday I watched a woman trying to get out of a tight parking spot in a big vehicle, while holding a phone to her ear. I was watching carefully so I didn't get run over. I caught her eye, did the phone holding gesture, while shaking my head at her. She just got angry and revved the engine more. Fortunately I was beside the vehicle, not in front or behind, but I was beginning to worry about the surrounding vehicles. What could be so important that she couldn't complete the call while parked, then devote her full attention, such as it is, to the difficult task facing her? I don't think she had completely grasped the concept of turning the steering wheel this way, while backing, to make the front of the car point that way. Sigh.

I wish I knew what caused people to make choices that they know are bad for them. Driving is one of the most dangerous things a Canadian can do. The manufacturers have made cars ever safer, yet people are devoting less thought to driving. They know they can't (not in the legal sense, but that it's nearly impossible to) text and drive, but seem compelled to pick up the phone.

People know that smoking tobacco is a disgusting habit that will damage their health, and that of the people around them, yet they continue. Worse, they somehow start.

People make poor food choices, sometimes because that's all they can afford. I've been asked at work where I get the food I bring for lunch, it smells so good. I tell them it's often what we had for dinner the night before. Yes, they say, but where did you get it? Umm, Linda cooked it. They don't get it. Many of the people I worked with over the last while not only don't cook, they can't cook, unless heating up canned contents counts. Not.

Trinkets like the iPhone are all very well, but there's lots of days I think there are some fundamental things wrong with our society. Do you agree? Stories you can share?