Over the hill, the old, the dead, but not morbid!

I was just a tad dubious this morning. Dubious about the whole darned thing, starting with getting out of bed. Still, it was supposed to be a nice day, and I was mostly awake, especially after the excitement of signing up for a Lightroom course put on by the famous Neil Zeller.

At first I thought of shooting downtown from a location I've run a number of times, but then realized the light was coming quick, and I wouldn't have time to get there. Then I remembered a suggestion that Tom Campbell's hill was good. I didn't know where to park, so I goofed there, but made it to the top of the hill just in time.

The light was never what I'd call spectacular, but it was pretty darned good, and I'm still at the stage where I'm working on reliably getting good images to work with. My theory is, get good at the ordinary images, then I'll be ready to take full advantage when spectacular comes along. In Calgary, that's every few weeks, on average, if you're in the right place at the right time. (There's an app for that.)

Downtown, looking over the hill. Yes, the purple and blue haze was there. 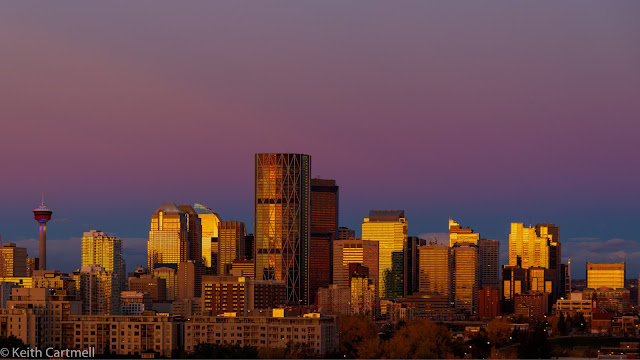 Remember I promised a week ago to get the Tower, the Palliser and the Grain Exchange into an old skyline shot? Here it is, though you have to settle for the back of the Exchange building. Unless you've got a magic lens, or a honking big mirror (hmmm) there is no way to get the front of the two buildings, and the tower, with no other buildings in the same photo. Give it a try, if you like, I'd love to see your results. Now that I think of it, I'm pretty sure I can get the back of the Palliser, the side of the exchange, and the tower in a photo, but I'm not so sure about the no other buildings part. 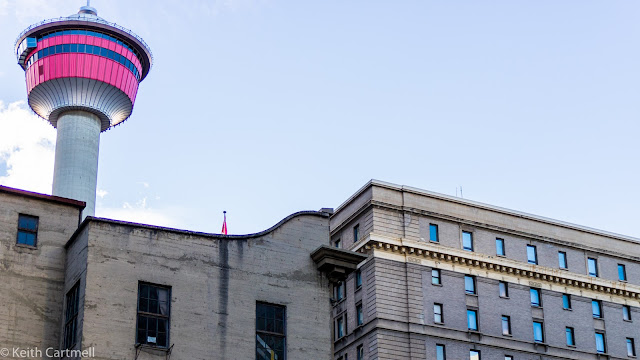 The dead are sometimes good companions. They don't talk much, they listen if you want to talk, and they don't mind if you do other stuff like read, or take photos. Of course, this is ordinary light, nothing special. I'll have to come back earlier in the morning, later this year, when the sunrise is right. 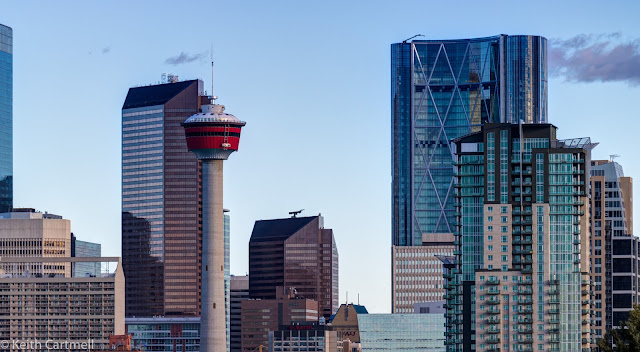 My question about the whole morning is how did I not know about Tom Campbell's hill? That's a lovely place to go for a sunrise or sunset walk. I got a number of other potentially nice shots from up there that I'll have to develop. I am amazed and happy that some developer didn't snatch it up to sell off lots for expensive homes.

I scouted out a few other promising locations while taking the scenic route home. The wind picked up but it was still nice for a 5 K, 33 min run, 6:36/K pace that felt pretty good by the end. It started a little clunky and I didn't feel as strong as I would like, but it's in the books now.