Saved by the work coffee grinder

Just not the way you think. But to get there we have to start with a swim.

Which was nice in that there was no pain. The 1k in 19 minutes in a lane by myself was so-so in the great scheme of things, but good after such a painful swim on the weekend. The real treat was being in the newly re-opened competition pool! Yay Talisman, opening it on time. Both pools and the dive tank were full. It's nice to see the facilities so well used.

Things got a bit surreal in the hot tub. Who of you are so unfortunately blessed in that the name Dortmunder means nothing to you? I say unfortunate because you are missing out on one of life's great experiences, reading Donald Westlake's Dortmunder novels. I say blessed, because you get to read them for the first time. I envy you. There are almost as many quotes for that as for the Princess Bride. (Inconceivable!)

But this is not about Dortmunder or the Bride. It's about the regulars in that series. Unnamed bar regulars. Westlake must have been eavesdropping, because you can't make that shit up. A couple of the regulars escaped the O.J. Bar & Grill on Amsterdam Avenue, and were hanging out in the Talisman hot tub. I won't attempt to replicate their conversation, but I was listening with admiration, and wishing I had a tape recorder running.

(take a deep breath)
It started with construction around the new Children's Hospital (at least I think that's where it is, there was some confusion which you will understand shortly), then detoured to the old Children's Hospital, with a sub-detour on the traffic problems caused by helicopter landings there, then back into them putting in a traffic circle for Shaganappi Trail and 16th Ave, AND whatever Memorial Drive is called there (another detour), PLUS special exits for ambulances for the Children's Hospital, AND Foothills Hospital (which is unfair and a slight against other drivers), along with discussion of the demolition of the old DMV that used to be really near there, and where one of the regulars thought the construction was, and since one of the buildings there is named after Col Belcher, or was, this dragged in the old (now demolished) Col Belcher hospital downtown, which lead to the demolition of the old other downtown hospital in Bridgeland, the various adventures of the Holy Cross hospital, and that's all before discussion of what happened to one of the regulars IN one of the hospitals. I was so lost in admiration at this point I don't know which hospital, or if it took place in a ditch by the road construction by rogue doctors and nurses from some hospital.

But no editor would buy it, since it's not plausible and I'm not Donald Westlake. Just go buy the books and thank me later.

Then at work. Normally I go up to my office lugging my pack and swim bag. Then take the swim bag down to the locker room so things can dry out. Then down another floor to get a coffee, if I feel like it. Sometimes I bring coffee in a small thermos. Then up to my office to enjoy real coffee, well done, since the coffee shop in my building is pretty good, along with my second breakfast. Usually granola, yogurt and fruit, if you're curious. My (former) colleagues had been trained not to bug me till after I was done.

There I am, waiting for my coffee, and wondering if I can ask how his business is doing with 400 fewer people in the building. It's not a surprise to any of you that I don't understand management's reasoning in doing the layoffs. Yes, layoffs had to happen, but the people selected baffles me, and many other people. Subsequent decisions baffle me even more. In other news, Penn West stock closed at 61 cents.

(Oh, and they let go the guy I work most closely with. They kept him but laid off all his staff, and now he's gone. After 3.5 years of working there, I now know 5 people well enough to ask to go for coffee and actually be able to chat. Sigh. Of all the people I know there at all, I think only one of them has been there longer than me. Let's just say there's been lots of turnover. Another sigh.)

I'm waiting for the grinder to finish, so I don't have to yell. It was going to be a moderately caustic remark about how empty my floor is and what foolish choices had been made recently. As the grinder stopped, the top guy walked in. The corporate big dog. The biggest cheese. He didn't even have to order, the coffee guy got him the regular. I would have been in the middle of my comment, building a head of steam when he walked in, but for the grinder. I tipped extra.

Today was pack up the office day. I think I mentioned I move up one floor and down the hall a bit. I've scoped out my new office and think it will work out well. The complete silence was getting to me, even with playing some music. A new guy is coming in to replace the guy they just let go. His name is vaguely familiar, and I'm thinking I worked with him at a turnaround in the long distant past. We'll see.

Look, pink office buildings! Sometimes the views getting into work early are nice. 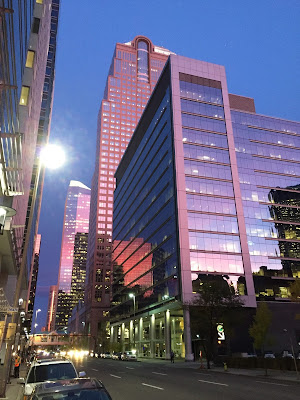