But it was a cold rain, as always here

Unusually for the Labour Day weekend, it's raining. It's raining lots and lots.

But some buddies of mine had queued up a weekend run. I hadn't made it last time, and I figured if I bailed again they'd start thinking I was a weenie or something. Can't have the truth come out that easily.

So there I was, quivering with eagerness to be picked up at oh dark 30. I mean shivering. The rule in Calgary is, if it's raining, it's cold. It was.

The problem is that this cold is hard to dress for. Dressing for a run in -30 C is easy. Lots of layers. If you over do it and are too warm, it's easy enough to unzip just a little, and the DRY COLD will suck the moisture right out of your layers before you can say Jack Frost. You'll likely be zipping up again soon.

But rain at about 5 C (41F) is really hard to dress for. You want a long sleeved layer, and a mostly waterproof outer layer. But the in between is the hard part. I should have worn a second top, but I put on a fleecy layer and I was too warm for most of the run. Unzipping gets you nothing but even wetter, and probably clammier, but not cooler. At least not in a good way.

It really throws me when I run in the rain in warm places. Nova Scotia and Bermuda come to mind. There you don't wear a rain layer. Shorts and tech shirt and away you go. I suppose on reflection sometimes Nova Scotia can have a cold rain. I have readers that can give me the low down.

All this makes it sound like I didn't enjoy myself. Not at all! Who wouldn't want to run with 3 women? We all met up at Angela's (a place not a person) and headed out for what was to be an easy 10 K run. It turned out to be not quite 10.75 K in not quite 1:20. This was a hair longer than I really should be running with my current fitness and muscular state, but who cares! 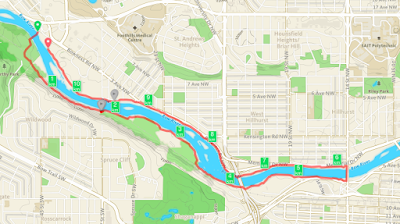 And oh, what the heck. Here's the iSmoothRun graph. Lots of activity there. 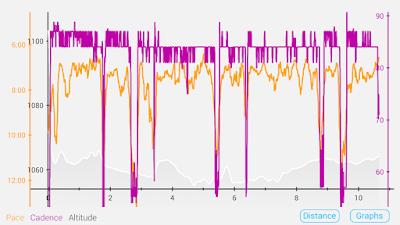 We did some walk breaks when it seemed like a good idea. I splashed through some puddles. We chatted about a zillion topics. We didn't get eaten by wolves. The river is pretty this time of year, as the trees are just starting to show some yellow. The coffee and treats and more chatting after were awesome! What's not to like?

Once home again and showered, I was captured by cats and put to work providing a lap and cuddling. I napped. More of the beef barley soup. Such a lovely day.

Here's the cats just before the cuddling. It isn't all cuddling and lick-fests in the cat world. 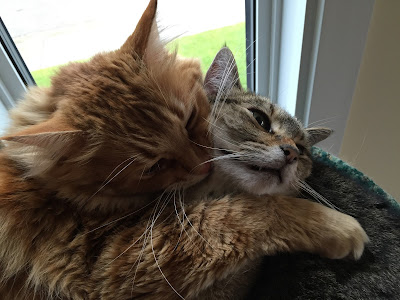