So enough about work for now. That will sort itself out and I don't have much control over it.

There's been a couple swims this week. Both went well, with lots of kick and drill stuff I haven't done for a while. Both days my knees started off kind of creaky and I had to be careful not to push off the wall too hard. It gradually got better, and the swim went quicker.

My mouth is full of fillings. I didn't get many cavities as a kid, but got a bunch in my teen years. My current (wonderful) dentist thinks they are something out of the stone age. I'm pretty sure he is planning to replace them when his daughter (currently in grade 9) is going to university.

A while ago I had part of one tooth fall off. It didn't hurt a bit, I thought that crunchy bit was just another bit of granola. Turns out that tooth was just a thin shell over the filling, and the various stresses created tiny cracks, and eventually the cracks joined up, and off it came.

I opted for the crown, rather than just spucking on a bit of plastic. Drilling out the old stuff wasn't much fun, but it wasn't bad either. A couple weeks later the permanent crown went on. The temporary one was pried out, look Ma no freezing, and the new one put on. No muss, no fuss. Unlike some of my other toothy adventures. They matched the colour really well.

Today is a drizzly rainy day. Yes, the grass is green. So unusual for this time of the year. 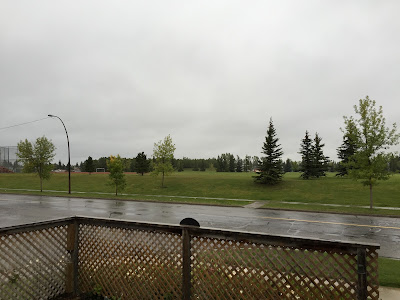 Linda started a beef barley soup first thing. The scent wafted through the house as it slowly simmered. There is something very primal about the smell of soup in a warm cozy house on a cool rainy day.

Some friends dropped by. We had a perfectly lovely afternoon chatting, while drinking coffee, eating soup, and nibbling the many treats on hand. They've been retired a while now, and I've been picking their brains about it. I'm making more of it than it is, they say. It just isn't that hard, they say. You won't spend as much money, they say. You'll have more fun, they say. You'll still be busy, but doing the things you want to do, they say.

The way they say it, it sounds awfully tempting.

I'm trying to do more text messages by speaking to my phone, than trying to type. Going back to fix it is a pain in the butt. Every now and then I just let the message go, figuring my friends will either read between the lines and get it, or at least be amused. This is what got sent to my buddy Susi first thing this morning. I thought I was making sense at the time. Maybe not. 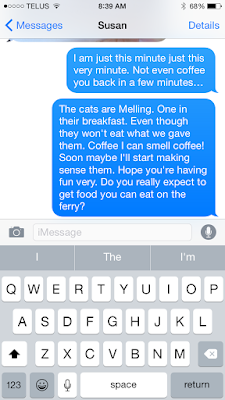