Verbs. I need to work on my verbs.

Swam Wednesday, working on long and strong stroke. Lots of golfing. For a while I was stuck at 79 or 80, (39 strokes, 40 seconds) or worse. Then after a bit of work slowing my stroke down to make it stronger, I tried golf again. 75 (33 strokes, 42 seconds) I did that several times. Working on 100 m sprints this way were only slightly slower, but I was less out of breath.

Thursday we strolled downtown to see Beakerhead stuff. The giant claw was under repair, so that wasn't so much fun. We wandered around the newly renovated St. Patrick's island, and really liked it. Here's a few photos. I want to join up with some buddies and run all over the island. Then we headed back downtown.

The Bow river can be very pretty. 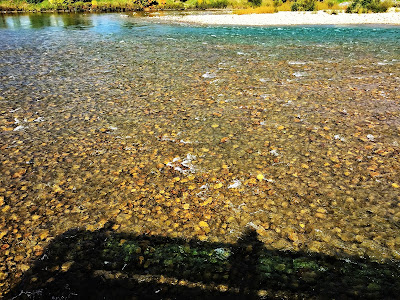 A sculpture made from recycled streetlights. I am awaiting seeing graffiti scrawled on it way up high. 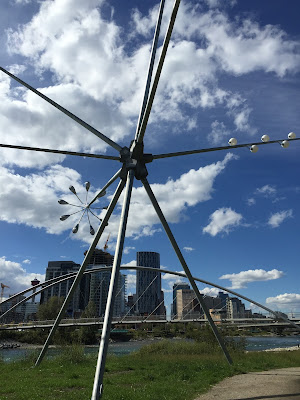 Under the Skipping Stone bridge. 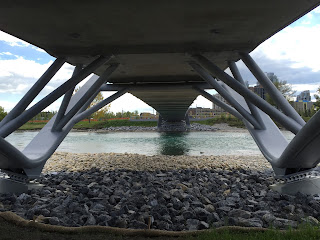 I rejoiced to see the shark car! Pity it doesn't go very fast. 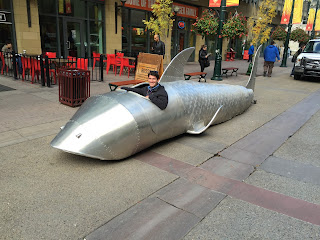 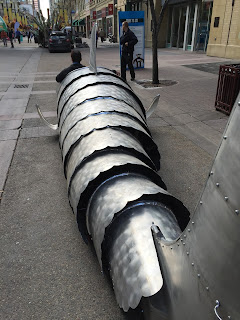 There's a new guy at the top of the new hill. Linda liked him. 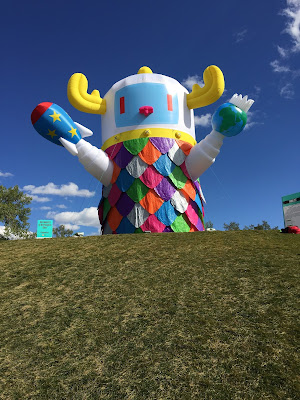 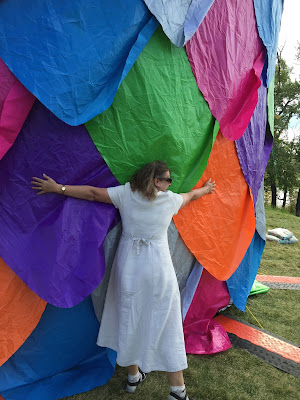 We walked just over 8 Km, and by the end I was feeling it a bit in my left foot. Oddly enough, sometimes walking slowly is harder than running.

Back in the pool Friday. More strong stroke stuff, feeling good. Last time I tried 100 all out it was 89 seconds and nearly ready to puke. Now down to 87 seconds, and feeling stronger. Repeated the golf scores several times.

It was so nice out I tried to run that afternoon and what a mistake that was! The first couple K were ok, but nothing special, then the niggles started, and kept getting worse. I called it done at only 3.5 K or so.

Saturday was nice enough for a bike ride, but I called it a rest day. We went back down to Beakernight, and strolled the crowd. We had a really good time. Flaming skee ball! What more do you need to know? We found the other rabbit. He seemed to be a little sad at being separated from the bunny herd. 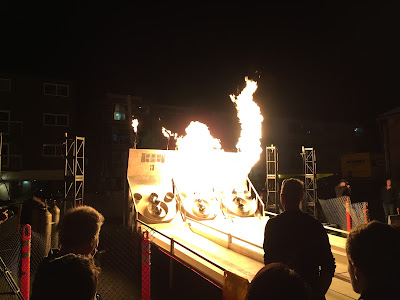 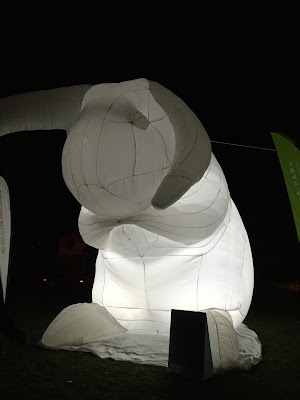 It was nice to see so many people out enjoying the displays of eclectic stuff. It was a perfect summer evening. We didn't get into the man-basket for a ride up 200 feet. I was willing, but the line up was really long, long enough I was wondering if everybody was going to get a chance. I could have hung out and listened a lot longer to the percussion players set up right by the LRT station.

Sunday back in the pool again, trying to keep up with Katie. Still a work in progress. Used to be I could stay in her draft about 50 m, and be out of it by 75. Today we swam side by side for a bit. I kept up for 100 m, her gaining ground slightly on the swim, me a bit quicker on the flip turns. By 125 m I was fading, and I stopped at 150 m, out of breath, arms tired. She kept going, cruising along.

Overall the swim was really good. I did 100 m in 87 seconds twice. Repeated a 75 golf score. Worked at trying to maintain a 100 second per 100 m pace, and got 200 m. I'm pretty pleased with that. The new stroke is settling in, feeling pretty good as long as I think about it.

Michelle and I got a coffee after, and we were watching some of the synchro swimmers training. I'm just amazed by them. They were swimming some laps, and their stroke looks a bit sloppy, but they are swimming along just about as fast as I can swim at all. I can't even beginning to be vertical upside down in the water as I wave my legs around artistically above the surface. I think I'd drown trying some of their drills.

Oh yes, some other photos, just because. The new national music centre rising on the reconstituted bricks of the famed King Eddy. 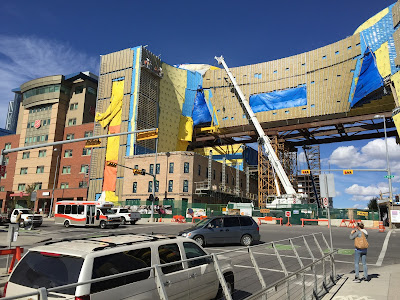 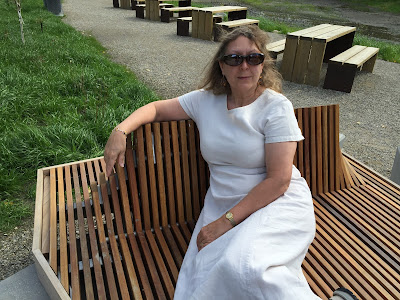 Linda, playing the puppy orchestra. Very well too, I might add. 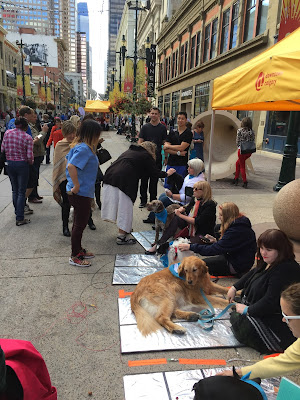 It's been a lovely vacation. I'm feeling more rested, but I'm not especially ready to go back to work. You will all be delighted to know that the major thing on my to-do list got done. Yes. Business tax paperwork.