It really gets my goat when people drop into a crowded lane swim with no consideration. Today there were only 2 lanes for us public members at Talisman during the time I wanted to swim. The other 14 lanes had swim clubs practicing.

Having one pool out of action for maintenance is necessary, but painful.

There I am, looking at my choices. One lane has Katie and 3 other people in it. I recognize her right away, but I also recognize the swim stroke of the two other guys. They were the ones I was watching last weekend. They swim faster than Katie. The other girl was keeping up with Katie. I timed them all.

Much as my inner shark was ready to get in there and draft like a madman, a cooler head prevailed. I know perfectly well I could barely keep up for about 100 m in that lane. The other lane had two women swimming only slightly slower than I was planning, and one guy floatie doing things that only marginally resembled a swim stroke, very slowly, while wearing fins. I timed them. The two girls were passing smartly. I joined them.

Notice, please, that I didn't just jump in. I sat with my legs in the pool getting ready as they did a couple laps. I caught their eye, however briefly, so they knew I was joining. He didn't notice. I decided to do a straight up relaxing swim, not trying to set a record or gratuitously pass people.

It worked out very well. We all adjusted our spacing so we could take turns passing Mr Floatie. They paused on the wall and let me pass the few times it was necessary, then hung in my draft. That's fine. We swam for a while in peaceable 4 part harmony. Mr Floatie disappeared, and was replaced with a Burster. At least he was polite about it. He'd swim a couple laps, mostly keeping up and fitting in, then would catch his breath at the end for a while. That's fine too.

Eventually just me and the faster girl were left, and we happily chased each other up and down the pool. She was leaving as I stopped, deciding that 2 K or so was a nice swim. A couple very slow breast strokers joined the lane as I got out. Katie kept swimming, but I could tell she was nearly done. The other people had left, and One Kick Splash Girl had joined her. All was peaceful, in what could have been chaos, because of the consideration of everybody joining the correct lane.

I didn't time the lap splits like I usually do; there was too much variation in pace. Sometimes I'd be cruising along in a draft, hardly working. Other times I'd be pushing a bit harder to time a pass. This is the first swim in a while where I've had to pay attention to other people in the lane, and that just made it interesting to think about the subtle timing changes.

In other news, I'm still working at Penn West, and it sounds like they want me to stick around at least for a little while.

We picked up treats at Sidewalk Citizen, and they are awesome! This brownie was one of the best ever. Pity they are so far from where I live or work. Or maybe not... 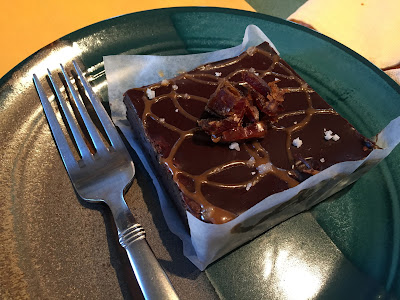 And Curtis has been supervising some literary efforts. It's very difficult to type with such supervision. This was while I was working on the intro to my last guest blog, by Amy. It's a good read if you missed it.