Fear, Humble Pie, and One More Try. A guest blog.

You meet the most interesting people along the way. I ran into Amy at one of the events leading up to the Calgary Marathon. You may have seen her up on the stand with Steve King, doing race play by play at various events. She called Michelle and I in at this summer's Calgary 70.3 for the best finisher photo ever, and managed to sneak into one of the photos herself.

Everybody walks a different road to fitness. I've read lots of blogs about winners and PB's, and that's nice, but it isn't all rainbows and unicorn poop out there. Some make it look easy, but we don't see behind the scenes. I wince at what some people go through to stay active. Lots of people struggle with physical injuries or the all important mindset. Amy has struggled with both, and I think it's really important that such people realize they are not alone. I'm happy to give Amy a stage (such as it is) to talk about what often stays private. It isn't easy to confront your fears.

Take it away, Amy!


The last five years has been filled with nothing but failure and disappointments. I went from being a strong, confident woman to a socially awkward, injury-riddled, and exhausted stay-at-home Mom. Only in the last few weeks have I realized everything I’ve been doing wrong. Humble pie isn’t the easiest thing to eat, but sometimes it is necessary to taste so we can make improvements.

I was a latecomer to fitness, but finally found my niche as a fencer around age 28 and did that competitively for a couple of years. I was at the top of my physical game. As I look back it was easy since I had nowhere to go but up. I pushed my body physically and mentally through hours of fencing a week, and I loved every sweaty second of it. This sport is the equivalent to chess on your feet since you always thinking a couple of moves ahead. Looking back, I realize now how strong this sport made me - fencing is all about leg strength. You are never standing, but are always in a squat or lunge. 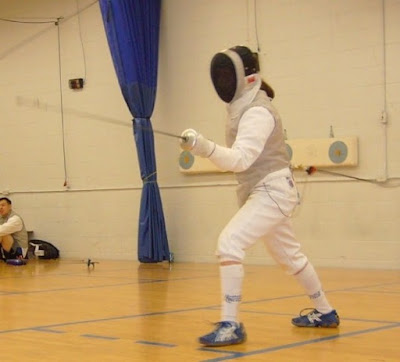 Fencing, and getting a few points on olympic gold medalist Jujie Luan. 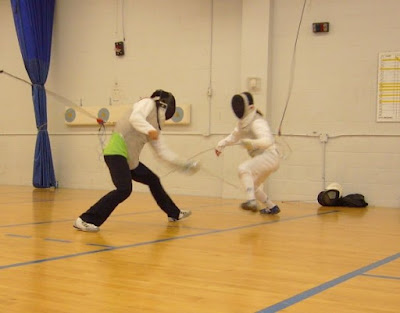 I started running in the spring of 2009 to complement fencing and quickly fell in love with it. I loved that I could zone out, listen to music, and be by myself. I decided to train for and run the Harvest Half Marathon in the fall of 2009. It was my best ever half marathon. I wasn’t fast (2:30), but I’ve never been very concerned with being fast. I did the training, ran the race meeting my expectations, and had an amazing time! 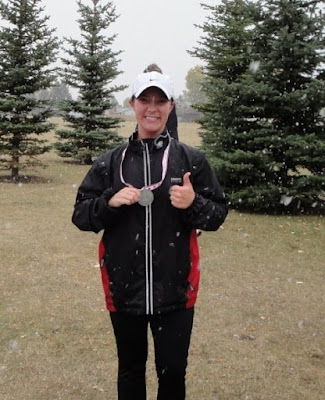 I got pregnant with my second son shortly after that thinking I would keep my fitness and running up. That didn’t happen. I was so sick during most the pregnancy and had terrible, painful hormonal skin breakouts that left me not wanting to leave the house…and I didn’t. This is where things started falling apart for me physically and my confidence was lost.

After Greg was born, I rushed back into fitness thinking it would help me feel better to get my athletic identity back. Don’t get me wrong, I love being a mom, but I do need to have something else in my life other than looking after kids. I took every shortcut in the book to get back into shape-no fencing this time, no strength training. I ran and that’s all I did. I signed up for marathon in 2011, had a disastrous training cycle full of knee pain (I was told it was ITBS) and anxiety. I should have stopped, but didn’t. I ran, walked, and limped the marathon in Kelowna, B.C. to the tune of 5:45. It was awful and still haunts me to this day. I lost all love of running after that and just went to the gym to jump on the odd cardio machine and play with weights. I was lost and completely crushed with no motivation to do anything.

See, running used to be fun! Harvest Half Marathon 2009 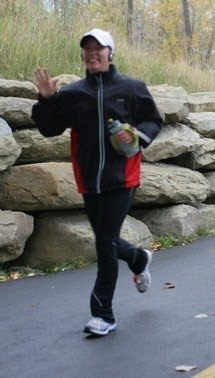 The one bright spot in all of that was a sprint triathlon I signed up for at the last minute and did with zero training. Holy cow, did I ever have fun!! My knees hurt for most of the run, but it didn’t matter, I was hooked! 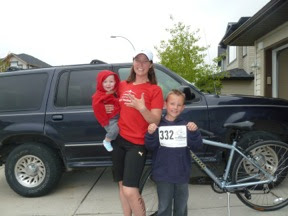 Shortly after that I got pregnant with my third son and promised myself to take a year off hard exercise to be the best mom I could and enjoy my children. That brought me to 2014. I had so many dreams and goals - the ultimate goal being Ironman.

I thought I was doing what I needed to be doing to get strong, yet I kept experiencing race failures and my knees breaking down in training cycles right before I hit peak weeks. My confidence continued to crash and burn-I felt like a complete fraud! No amount of physio was helping my knees enough to get through the beginner *BEGINNER* training plans I was trying. I was getting so angry and frustrated.

I got tired of everyone telling me my knee problems were ITBS, that wasn’t it! I was doing the physio and foam rolling, but it wasn’t working. So I gave up. I dropped out of my fall running and biking events and seriously considered cutting myself off from all friends who I made through running and triathlons. Yes, Keith, that would’ve meant you too. I was a fraud after all.

I went to my family doctor in January of 2015 for a usual checkup and I told her about my knee issues. She referred me to a sport med doctor who thought I had might have meniscus tears, so we went ahead with an MRI and 5 month wait to see her. The MRI in July 2015 revealed I didn’t have tears, but chondromalacia patella. I won’t go so far to say I was happy, but I wanted an answer and now I had one. I started doing what I thought was good cardio and strength training. I even dared to have some race dreams again. This is where my post should end, right? All happy and full of inspiration again?? NOPE.

I was having trouble getting myself motivated to do anything. I’m so tired of starting from the beginning and am scared that it’s not going to work again. I tried an open water swim in August that turned out to be just another failure to add to the pile. It was at this point I realized that I don’t know what I’m doing and needed some help. I took a big step and signed up for a fitness class. I’m quite anxious around groups of people after all these years, so have avoided it. However, I can’t afford a triathlon coach or personal trainer, so group fitness at my gym is my only option at this point if I want help.

I chose a spin/TRX class that is once a week. It ended up being a small class (five of us including the instructor) and I really like it! However, this is where I got my biggest slice of humble pie yet. It hit me after the first class, and confirmed after the second, just how wrong I’ve been training all these years. Yes, I was puttering at the gym, picking up weights, setting them down, but I haven’t PUSHED myself since I fenced five years ago!!! THAT is why I’ve had injuries, THAT is why pretty every race in the last five years has been a failure. I thought I was an athlete and could get by with the bare minimum of training out of fear of injury. I can’t believe I’ve been such an idiot!

This rude awakening has given me lots to think about over the last couple of weeks. I’m pretty embarrassed and angry at myself, but you know what else I’m feeling? Excitement. I will run again. I see what I’ve been doing wrong. I know I can make myself stronger and there’s the slight possibility that I haven’t tapped into my true potential yet. I still have a lot of fear from the pain and failure I’ve had over the last several years. I do have this knee condition and have no idea how that will impact my triathlon future yet. I don’t plan to start running much until the spring and won’t know if I can really chase my dreams until I start building running mileage. Right now I will focus on strength training and cycling with some help to make sure I’m pushing hard enough to get this body into what it used to be. Sometimes I really wish I could give up, but I just don’t feel like I’m done yet. I’m willing to give triathlon training one more try…here I go!