Lots of readers and some nice comments on my recent political rant. If you missed it, and that's what you came here for, you can find it here.

Swam on Friday, working on stroke technique. It never ceases to amaze me how subtle it can get. Just being in the water more often has changed my water feel a little bit. I'm working on increasing my arm turnover, and separately, working on increasing my reach and catch. Then I'll be trying to put them together. My elbows have been traitorously slipping lower. They were spoken to firmly about being higher. Working on coordinating a better roll with pull.

Rode outside on Saturday. It was the last nice day before some rain was forecast. It's kind of funny, that I'm a bit reluctant to get on the bike because I remember various portions of anatomy complaining about it. The changes from the bike fit has made the bike enormously more comfortable, but I'm still learning that. I haven't been out as much as I'd have liked to be, but other things are getting in the way. I wasn't ready for a really long ride. This was 19.5 K easy, in 50 minutes. It felt pretty good, but I'm glad it wasn't longer. I'm not sure how many more of these will happen before the weather closes in and I'll be back on the trainer again. This will become a focus so I'm much more ready to ride outside next year.

Ran Sunday, 5K, 32:17 and the odd thing is that I wasn't trying to run fast. I'd gone out for a nice relaxing run, and my feet felt like running. The finish time was a bit of a surprise to me. I haven't run this fast in ages. Stretched after.

Swam Monday, lucky to have an island of peace in a bit of a pool gong show. I was in the water quite a bit later than usual, since I had a dentist appointment first thing. Actually, it was with my dental hygienist, who has been working on my teeth more than 20 years now. She likes a challenge.

As you know, Talisman has one of it's pools out of action. (It looks like good progress is being made. Someone was polishing some of the tiles.) As I walked to the other, I thought it would be quiet, since the water was calm. But they fooled me. Half the pool was a men's water polo practice just getting started. The other half had a half an hour till a swim club took over all but two lanes. I got in a lane by myself and got'er done. Swam hard, knowing this was going to be it. 1K, 18:10! Really pleased with that. I was thinking if I'd paced myself slightly better at the start, and my knees were feeling a little stronger, a sub-18 minute time would be mine. Soon.

I remember the first time I did a sub-20 minute K after not swimming for a long time. It took years to get back to that pace. The first time I nearly puked on the pool side after having made it by just seconds. A couple of days later I did it again with 30 seconds to spare, and was hardly out of breath. It would be nice if the same thing happens again at 18 minutes, but I'm not holding my breath.

I really did think about carrying on in one of the other 2 lanes, but that was the gong show I mentioned. One lane had 2 people all over the place. I couldn't tell if they were splitting the lane or doing circles. The lane had 4 people in it, and what a mix. A couple of slow breast strokers, one really slow front crawl, and one girl that could actually swim. I was wondering if she was enjoying the challenge of dodging the others.

Days like this I wish the lifeguards took a bit more of an active role in organizing people into the appropriate lane. People really would be much happier if they swam with others of a similar speed. The problem is that so few people know how fast they really swim, and what that looks like. Then there are the ignorant dicks that refuse to swim circles as other people join in. It isn't your lane, buddy, and I wish the swim lane Nazi was there to "encourage" you to share nice, by whatever means necessary. I've swum 5 and 6 in a 25 m lane without the slightest difficulty. I decided not to join them, and camped out in the hot tub for a while.

Tuesday I'm just back in from a nice relaxed run, 7K, 47:49. Almost all of it was chatchatchat pace, just a bit coming back uphill, trying to maintain cadence that I was breathing a bit harder. Most of the run was not about going fast, it's trying to maintain a steady cadence, with quick light feet. I'm trying to train myself to not channel the poor T Rex in the tar pit that has dogged so much of my running. It's getting better. I'm also remembering what I've been told about moving my arms to help keep my feet moving. The rain has stopped, and it was cool enough for a lovely run around the neighbourhood.

I'm on vacation at last! There was a bit of a flurry of last minute, and I do mean very last minute work on Friday, along with refusing to stay late to work on something that I'm pretty sure is a half day's work when approached calmly. I didn't want to think about trying to do it in a rush.

Much of the time off so far has been relaxing, trying to sleep in, hanging out at the house, reading, watching a few movies, cuddling cats, and generally trying to get work out of my head. The cats are loving the extra lap time. Here's some photos of them enjoying us being around.

Celina snoozing hard, gradually settling into the gap between my knees, as the blanket slips into the space between the chair and footstool. 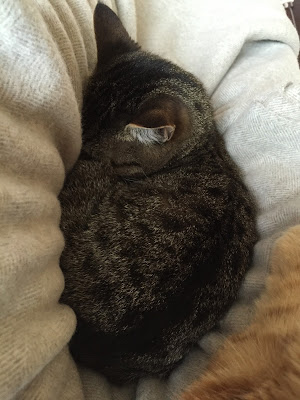 Movie night. They love the red wool blanket. We watched the Tom Cruise and Emily Blunt movie, where they get killed a lot. It was better than expected. You would lose your good opinion of me if I told you what else we watched. 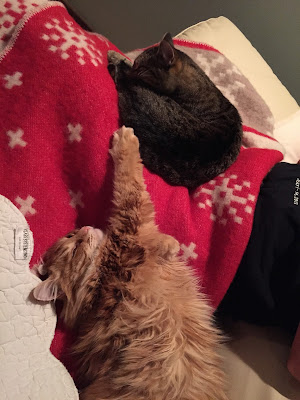 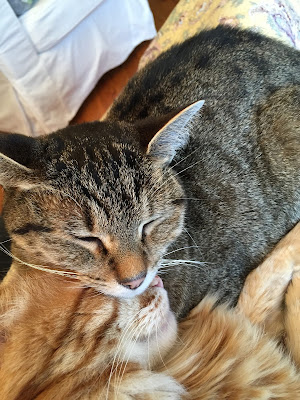 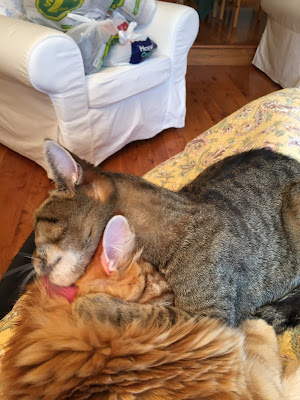 Then the mighty paw represses her. 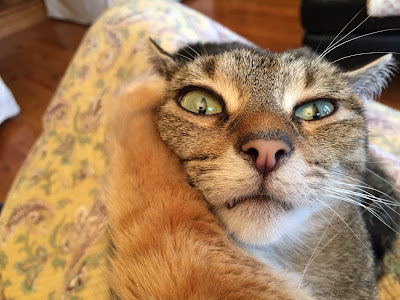 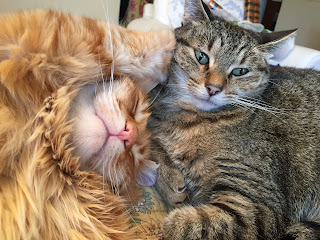 Rest from all the effort. Friends again. 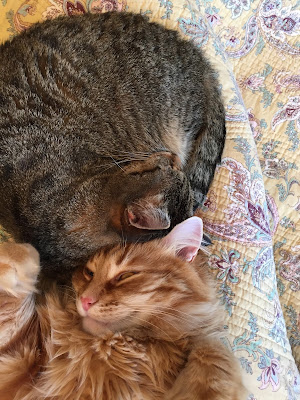