I've never seen anything like it. Me and another guy were looking at the swim lanes open to us at Talisman. What a mix of slow and fast. I wanted to play swim nazi and arrange people neatly. Preferably with a big shepherd's hook. A little organization would make life so much better.

There was a pair of lanes open. A woman swimming on the right was already swimming up the rope and down the middle, and was doing drill. She said she wasn't a fast swimmer and was happy to fit into whatever we wanted to do, and watch out for that other swimmer. So the other guy went there. He'd got there first.

I waited for the guy on my side to get back. He was wobbling up and back on the line, sort of. I asked if he wanted to circle swim, up the rope and down the middle. Sure he said, and headed off diagonally toward the far end of the pool. He got all the way over to the line on the other lane, and came back on the rope. I asked again, and he said that's what he had done and if I didn't like it too bad, he was going to keep going that way. Bah! I didn't need to be worried about a collision so I moved over to the other pair of lanes and joined a guy that was really, really slow, but was happy to share the lane. He was both predictable and lapped a lot, which didn't seem to bother either of us.

The swim ended up being about 30 minutes of pretty goodness. I was a long way from the clock so I don't know when I started.

Yoga was very nice tonight. I was feeling very in tune with it. Lots of good moves. I'm told I snored during savasana. My legs are feeling stronger and more stable so that was all to the good. Back to the therapist tomorrow. I'm hoping to run on the weekend when it will be 20 C or warmer!

As we finished up yoga I got this view, and driving home stopped to get the next. Neither are modified in Snapseed. A few weeks ago, the reflections in the window were such that I wanted to take a photo in the middle of class. 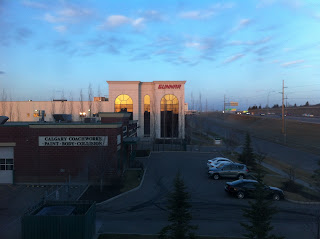 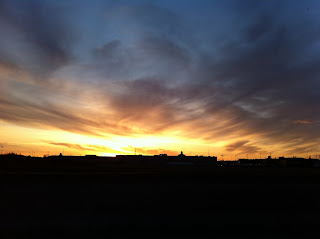